I’m very jealous today … why ? Well I just got this stunning picture from the multi talented Steve Forde. I’ve been following Steve’s creations for many years now and marveled at his creative output and varied projects. It was about a year ago that we were talking and Steve knowing my collecting obsession for Ray Guns asked me what i would think about a re-issue of the classic Buck Rogers Disintegrator gun. Whoa ! Seriously?!! quick answer is Yes ! Long answer is you’d better do it right and on top of that you’d better not do it so right that folks would mistake it from a vintage version.. as I know there are those who would take advantage of newbie ray gun collectors. Well after much hard work , Steve secured the proper licenses and various tweaks to the original design, I was greeted by this stunning image. 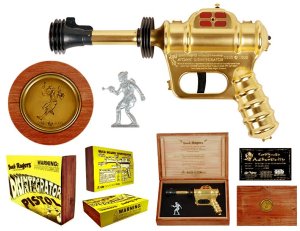 Steve has managed to do the impossible. Re-create a classic toy gun from the 1930’s but ever so subtly actually brought it into the modern age ( I guess a oxymoron since Buck Rogers is in the future ? ) The gold is electro-plated and looks stunning ! I’m waiting for my own copy to fondle, but the preview one I handled at Comic Con was awesome. It has the same heft of the old ones .. the pop is there, the spark window flashes ! The wood box with cardboard sleeve with art from the original version box is a great touch. The additional metal figure and medallion just makes it all a class act product. Thank goodness nothing has been replaced by plastic or some sort of cheaper replacement .. amazing ! If you want one, go on over to GoHero.com and pre-order one today !It’s on it’s way to be sold out so don’t delay. Oh ya, and that new 1/6 scale figure of Buck Rogers .. oh my ….but thats for another time ….