So really the highlight for me for Wonderfest was happening at the M1 Go booth. We made our way over there and whom did I run into but legendary collector Sanford Mock! Those who do not know his name, lets just say the term “Hawaii vinyl” is most likely due to Sanfords quest at uncovering many, many rare Bullmark vinyls that featured unique paint patterns on them as well as being cast in flesh vinyl in Hawaii. Anywho, I first learned about Sanford, in Yuji Nishimura’s now classic mook about soft vinyl toys. So like the planets aligning, Sanford and Yuij and I were all in the same place at the same time.. in fact I have not seen Yuji in a few years and the same is true for Sanford. Unfortunately, Yuji was extremely busy so we could only exchange brief greetings but hope to see him again soon.. and now for my geek out moment, part 1, I got to meet and get autographs from the sculptor of the Ultraman mask, AKIRA SASAKI ,the suit actor inside the original Ultraman suit,SATOSHI FURUYA and Hyata himself,SUSUMU KUROBE! I was so star struck I didn’t even take a damn picture (!) oh well .. what was cool was i said thank you in English, and he looked at me without missing a beat and said “You are welcome” in perfect English !

I had so many items from the M1 booth I could barely hold all the stuff…! Anyways I had to rush back to the booth to meet more folks and soon the show was over. I wish I had more time to see other booths, but we did as much as we could in the alloted time.. it was a very successful show and no doubt we will be back.
The next few days were a whirlwind of more meetings, shopping and a very special day arranged by Nomoto-san of Bear Model. After a long train ride we met Nomoto-san and jumped into his car. As we winded our way through narrow streets and much traffic we arrived at the studio were all the Ultraman series ( and more ) were filmed ! We were told actually that in a few days the entire studio was shutting down .. and most likely demolished because Tsuburaya had been sold recently.

The building itself is small by American standards but nonetheless a historical place. I thought we’d just look at the outside but “geek out part 2”, we got to go inside the actual building were UltraQ thru Ultrman Mebius were filmed ! Here’s my silly Ultraman pose on the platform in fornt a huge painting of a sunset… 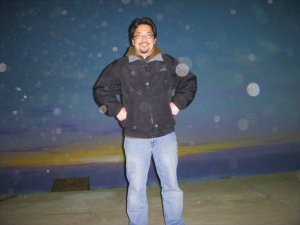 I actually thought of reaching down and scooping some dirt into a plastic bag to save .. but probably would have been kicked out of the building….
It staggers the mind to think this is where Eiji Tsuburaya over saw Ultraman, Ultraseven etc … and also sad to learn that the building would no longer exist. Nomoto-san also showed us his own kaiju suit he made for his own movie he is filming called Kingman. The kaiju ( whose name escapes me now, sorry ) was simply awesome! Made in the traditional way, with foam, and latex … very cool to actually touch a kaiju suit.Although standing taller than me it was relatively light in weight.

and also his hero called Kingman, here i am holding the mask..very nicely done.. I can see Captain Maxx like this in my mind ! 🙂

Nomoto-san was going to film something the following day, so we missed that but he than took us over to another soundstage to show us some very cool miniature buildings he would use for his shoot. These buildings you can actually rent and have been used in various films..some even from Godzilla films ! I was surprised when we took several of them outside to a special platform and were able to shoot some very cool pictures.. here myself and Nomoto-san towering above the houses !

Ok so if that was not enough a short drive over to where Tsuburaya Productions used to be ( sniff ) I missed the closing by a few weeks, but at least I made it to the front gates before this location went bye-bye as well.

Over to the left side was a huge empty lot, that was the former site of Eiji Tsuburaya’s home. I was shocked they would not make it a landmark or something.. I mean in the USA if Walt Disney’s home was going to be demolished I would think it would be saved as a historical landmark… but alas this was not meant to be. Maybe it’s a culture difference or simply economics .. but I do know that once these old structures are gone, well thats it. I think a shame, but at least I got to see some of it before it’s all gone.
Finally as if that were not enough, we were able to get into Toho studios ! The Bronze Godzilla out front set the tone for what was inside as well …

great details..the tail ripping up the concrete was a nice touch ….

and this painting on the side of the sound stage was really stunning, I thought a photo but an actual painting (!) Toshiro Mifune never looked so good ! I can not really say what we did inside ( sorry !) but needless to say we saw things that most folks do not get to see and met people that are normally off limits. I can not stress the importance and historical significance to these places and people .. sorry to say with digital making it’s way into all aspects of film, these artists are finding their skills less and less needed. With that our amazing tour was over and to say we were speechless is an understatement 😉 In my years of collecting a never imagined seeing and doing all this .. let alone be producing toys and doing kaiju art 😉 But I do realize that my inspiration comes from these Japanese masters and I do honor them and past masters. I hope by keeping what they do alive and letting USA guys know who these unsung artists are we can in some small way, keep this art form alive.
Ok next time the wrap up of my trip to Japan !