The Circle is now complete … 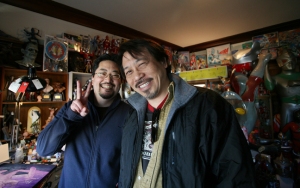 Sorta sounds like Star Wars .. not to get too spacey but the other day I finally was able to meet Super Duper Collector Sanford Mock ! Ok for those who do not know this name.. Sanford is a long time collector of Japanese soft vinyl toys.. in fact he was featured in the first printing of the now legendary Vinyl Treasure Mook by Yuji Nishimura ( this magazine/book was one of the first to show a wide array of Japanese soft vinyl toys, with estimated values ) anyways, Sanford and I go way back… in fact he is the one responsible for setting me on my path to collect all things Ultraman, more than 15 years ago ! So for me to have him see my collection and finally meet up was both a thrill and completed the circle for me. I consider both Yuji and Sanford as the Jedi Masters of Soft Vinyl toy collecting 😉 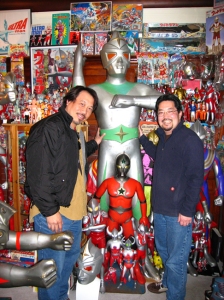 Was great to also meet Sanford’s talented wife, Rae, who took some awesome shots of my room ! I predict some cool things coming soon form such talented and nice folk !