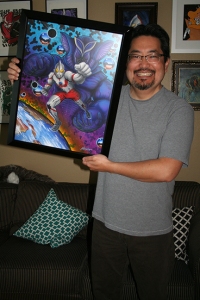 I’ve had to keep this under wraps for a few months now, but now I can reveal this painting ! In celebration of the 50th Anniversary of Tsuburaya Productions there will be an on going, multi year show that will travel Japan. The show will have original art, new toy designs based on Tsuburaya characters and more. I was honred to be invited to participate and to be honest would have been crushed if I was not asked (haha). For my part, I decided to paint Ultraman based on several influences. Of course, for those who have followed me thru the years, the major influence on me was the original Ultraman TV show and toys of the 60s. Once I figured out how many vintage toys there were of him .. well my life was consumed with tracking them all down ( my web site with some of my collection is here : www.ultramantoys.com ).  The other major influence on me is the artist Jack Kirby and Marvel Comic books. As I thought about these two influences it occurred to me that to my knowledge Kirby never illustrated Ultraman. I’m not even sure if he was aware of the Ultraman shows .. but, I thought, What if Jack Kirby had illustrated Ultraman ??

With that permise I began thinking about doing a tribute painting for the 50th Anniversary show… combining Ultraman and Kirby, with of course myself  ;-P

“Marvelous Ultraman” is the title of the painting and the process I took in creating it is below. The original will be on display for this show in Japan so if you are there I hope you go visit it for me  😉

With that I generated this first sketch featuring Ultraman’s foe, Alien Baltan in the background. And I’m trying my best to use a Kirby style but not so much that it doesn’t feel like my own art .. it’s a tough line to follow … 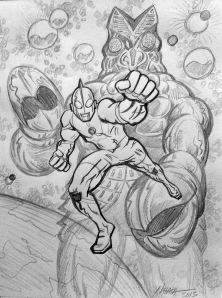 My designs had to be approved by Tsuburaya Productions and Bandai .. but this first draft was rejected and Baltan had to be changed or removed (do to the style I rendered him in )

Not wanting to sacrifice the style, I decided to use another foe, Alien Mefilas instead … and this time I got the approval 😉

I projected the sketch onto hot press illustration board and as my working method is made a full value pencil sketch onto the board. 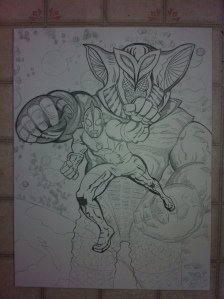 Once the pencil work was completed, I started blocking in the darks in the background .. yes had to use “Kirby Krackle”   😉 I mostly work from back ground to fore ground … 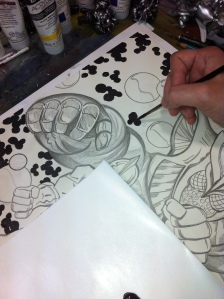 Also I’m trying to keep things sorat flat like an old comic but not too flat  ;-P 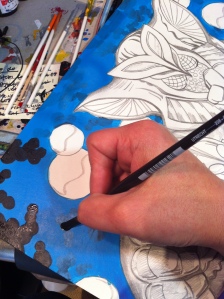 Adding color to the space back ground … using acrylic paints … 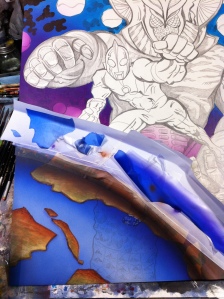 I wanted the Earth to be fully dimensional .. to play off  the flatness of some parts of the art 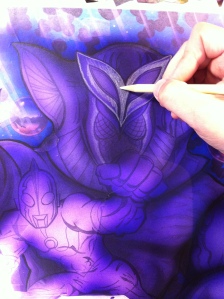 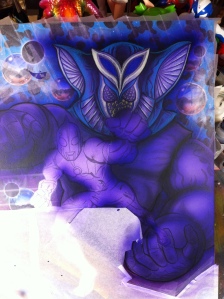 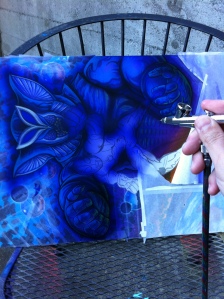 adjusting colors over my pencil work … 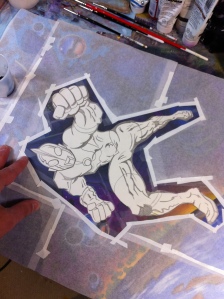 Time for Ultraman .. this part was a challenge .. again trying to keep the Kirby style but adding some depth to it as well .. and on top of all that some of my own style … 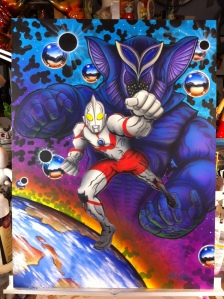 after spraying Ultraman, all the masks are removed and I go back in to clean up edges and make any adjustments .. pushing parts forward or knocking them back into the back ground ..

and below, there you have it ! I had to complete this painting fairly quickly, in all about 4 days worth, framed it, packed it up and sent it off to Japan. 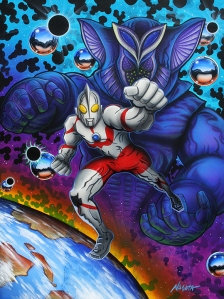 Ah, but there’s more that I worked on …  ;-P I got another few approvals but for now I can not say what it is .. but I’m pretty excited about it all (!!) Hopefully we can reveal these things very soon … so stay tuned. I’ll also post more specific information about the venue, dates etc for this show. I had a blast doing this art and hope you enjoy it too !

Over the years Mark Nagata has collected thousands of toys and a fair amount of titles. The man behind San Francisco-based Max Toy Company is widely known as: Toy Collector. Illustrator. Magazine Founder/Publisher. Toy Designer. Artist. Author. Husband. Father. But the one description that might fit best is an unofficial one – Kaiju Toy and Art Ambassador. In the Japanese-inspired art and toy area, as well as throughout the larger toy collecting community, Mark is welcomed and recognized for his personal passion and commitment to supporting artists all around the world and the unique works they create. Beginning as a collector in his youth, Mark has had for years a keen eye for great art and a personal interest in collecting that he has spread through a variety of outlets. Trained at the Academy of Art College in San Francisco, Mark honed his skills working for himself and for some of the most notable businesses in the country. As a freelance commercial illustrator, he completed works for such prominent companies as Lucasfilms, DC Comics, Hasbro Toys, IBM, Sony, and numerous advertising and design firms, both national and international. Mark’s colorful style graces over 40 cover paintings for R.L. Stine’s Goosebumps book series – Give Yourself Goosebumps. After hundreds of assignments, Mark made the decision to move in another direction, and that choice has led to whole new career as a successful businessman. For four years, the owner of one of the largest Ultraman toy collections in the world co-published Super 7 Magazine showcasing the finest in Japanese toy collecting. “I’d been collecting Japanese toys all along and suddenly realized it would be cool to have a magazine of some type devoted to them,” Nagata says. Mark’s devotion to presenting collectors with a selection of original figures inspired by classic Japanese toys from the 1960s and ‘70s as well as new versions of licensed Japanese characters is at the heart of Max Toy Company. Named for his son, Max Toys specializes in custom and limited editions of “kaiju” (Japanese monsters) toys and artwork. Many of the original toys produced are hand painted by Mark, a tradition that goes back to Japanese toy makers of the past. “Since our target is the soft vinyl Japanese toy collector, which is a very small niche, our runs of toys can be extremely small,” Mark says. “Runs range from 500 pieces of one toy to just one for a hand-painted, one-of-a-kind custom figure.” Through Max Toys, Mark has taken great pains to widen the reach of his two passions – toys and art. He played a significant part in the development of the first group kaiju show in the United States. Held at the Rotofugi Gallery in Chicago, Illinois in 2007, the “Toy Karma” Show featured detailed work from artists from Japan, the U.S. and South America. Participants marveled at the custom-painted toys and art on display. “Toy Karma” led to Mark being asked to be one of the artists spotlighted in the “Beyond Ultraman: Seven Artists Explore the Vinyl Frontier” exhibit at the Pasadena Museum of California Art. The October 2007 show, held jointly with the Los Angeles Toy, Doll and Amusement Museum, marked the first time – in a museum setting – that the influence of Japanese toys on California artists was explored. The exhibit featured more than 30 of Mark’s original paintings, toys and a selection of his vintage toy collection. Mark continued to be at the forefront as interest in Japanese-inspired art and toys expanded in 2008. Prestigious art houses Philips De Pury and Christie’s in New York and London sold Mark’s hand-painted custom kaiju toys in its auctions, spreading this unique art and toy movement into new and uncharted areas of the art world. In 2009, Mark once again took his love of toys and art overseas this time to a receptive and welcoming audience in Tokyo, Japan. Here, Mark curated the “Kaiju Comrades” Art Show, once again bringing together artists from various aspects of the kaiju toy realm in this first-of-its-kind toy art show. The following year found Mark in Barcelona, Spain co-curating with Emilio Garcia “Kaiju Attack,” the European country’s first kaiju art show. As the growth of kaiju art and toys increases worldwide, Mark continues in his unofficial role of Kaiju Toy and Art Ambassador. He has written and had his artwork and toy designs included in several books and magazines, both domestic and international. In 2010, Mark served as guest lecturer on kaiju and the toy-making process at the Morikami Museum in Florida. The San Francisco resident and his art can also be spotted in the first volume of the “ToyPunks” DVD and the “Toys R Us” DVD, while the video for the number one song by Owl City “Fireflies” featured Mark’s popular Kaiju Eyezon character. During this same time period, Mark has spearheaded the “Toy Karma 2” and “Kaiju Comrades 2” shows and has plans for future shows both in the U.S. and overseas. “Max Toys allows me to produce original artwork, new toys and work directly with a lot of talented artists,” Mark says. “Max Toy is a synthesis of toys and art, both life-long passions.”
View all posts by toykarma →
This entry was posted in airbrush, art show, art toys, Bandai, collectibles, kaiju, mark nagata, Max Toy, Max Toy Company, painting, pin up, toru narita, toy collection, Ultraman and tagged airbrush, art show, bandai, custom, japanese toys, kaiju, mark nagata, max toy, max toy company, tsuburaya 5oth anniversary, ultraman. Bookmark the permalink.