The premise was this, send artist / sculptor Todd Robertson x10 Kaiju Eyezons and have him paint and add his trademark Mecha to the right side. Once done, he would send them back to me so i could add my paint work and seal the figure. Also i the mix I thought we could also do the same thing but with a piece of art. Above and below, you can see the start of Todd’s work adding the Mecha pieces to the Eyezon.

While Todd was doing this I started the artwork … sketching in half of a Kaiju Eyezon on illustration board, primed and textured with gesso ( below ) 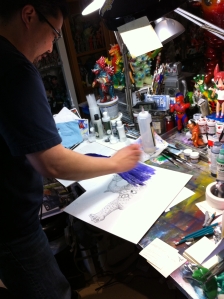 working quickly I washed in a purple / blue tone of acrylic paints. I kept the value dark as I was going to use the pick out method .. basically lifting out the paint with water and alcohol. 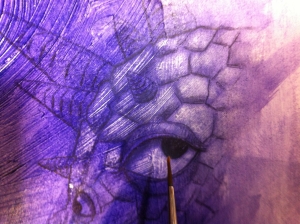 above, almost done with the initial lifting out of paint. The next step below was to wash in colors. 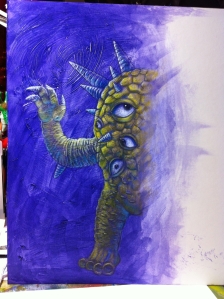 Below, the final image for my side of the board, which was sent to Todd along with the Eyezons. 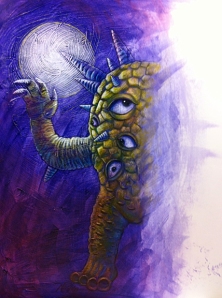 and finally, Todd hand delivered the painting to me below. Very cool to see his addition of the rest of Eyezon .. and nice touch that he added a painted version of his Mecha to it !

Each figure in this series comes with a 8×10 inch giclee print of the image below .. the original painting has sold to a very lucky collector !  😉 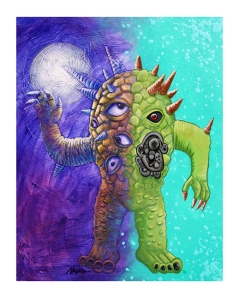 Back to the Eyezons figures … below you can see how I got them, with Todds completed work .. I began by masking off the Mecha to protect it from any over spray on my side .. and thanks to a suggestion from Todd, I started lining in the cracks on my side of the figure …

and after, each line is gone back over with an airbrush to add that special glow to the lines …

finally a bright neon pink is glazed over the line work … I used silver and color change flakes to the rest of my side to finish it off. By the way we are both using Monster Kolor paints .. really the gold standard in painted toy customizing now ….

As posted previously, Todd came out to San Francisco for a visit and we decided to work on a special Eyezon together …. here’s some shots of that fun day … 😉

Once again, we did half and half the Eyezon … Todd thought about doing the break up of the figure in maybe quadrants .. but for the viewer to see each artists work more clearly we just went with a vertical split… 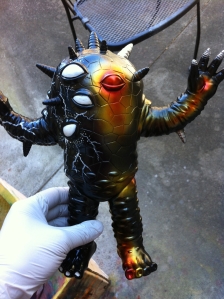 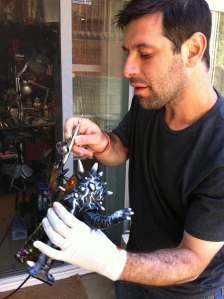 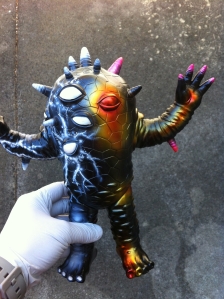 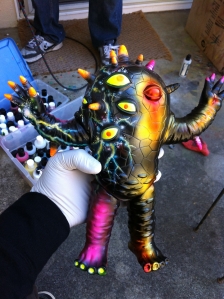 just about done at this point …

Looks really awesome .. just needs some clear coat to seal the paint work. and below is the final, piece .. this also has sold, by the way  ;-P 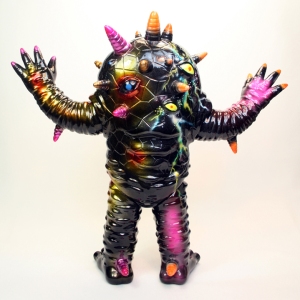 here we are in my studio … the funny thing is Todd and i both wore brown hoodies and the next meeting we both had on grey tees .. I had to go change my shirt .. haha .. like twins …  ;-P

Below: the final collab pieces, front and back ….

this version limited to 3 pieces. 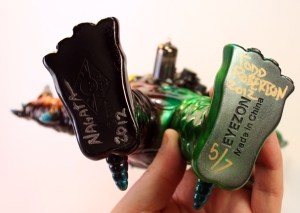 hand signed and number on the feet. 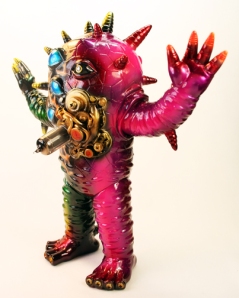 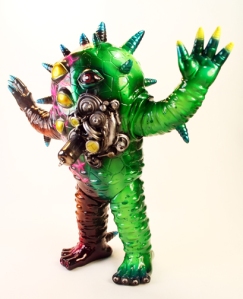 Hope you enjoyed seeing the process behind this project. Both Todd and I had a great time and are already working on the next project .. so stay tuned !

These will be $200.00 each plus shipping and CA sales tax of 8.5% if you’re a resident, via the Max Toy web store on Wednesday August 8th, 2012. First come, first served, each figure is slightly different, and unique, numbers sold in a random basis.