Here’s part 2 about my recent trip to Japan, for my 2 person art show with artist Konatsu and Max Toy stuff.

Party Time !
It’s amazing that the hours can seem like minutes while setting up a show but sitting on a plane feels like weeks have passed by …of course good buddies like Dol Roffo keep the mood fun ! 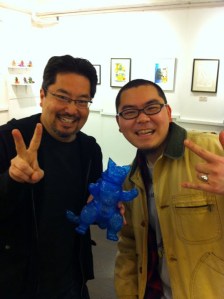 The show was set up and finally Konatsu arrives ! 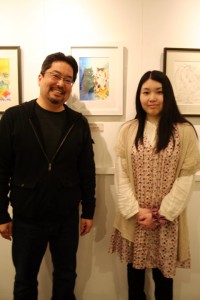 and yes, she’s very cute and could understand simple English and was able to speak to me as well ! and no, I still don’t speak Japanese … I’ll write about about it in a later post … haha …

Above, Konatsu-san talking to editor Ishizaki-san of Hyper Hobby … and yes the micro Negora customs …! 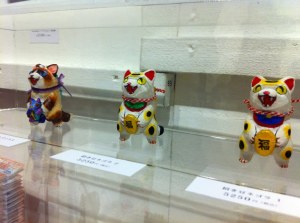 Gradually the guests arrive .. each person got a free gift bag with a KitKat box and micro Negora .. if your Negora was holding a gold fish, you won a all gold painted Mini Negora or Micro Negora ! Yesh as usual I forgot to take a picture of them … 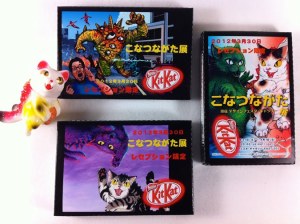 Hyper Hobby Editor Ishizaki-san … Hyper Hobby will have a special Negora offer very soon along with a photo article showing all the Negora’s released so far ;-P

The toy makers known as Handsome Taro 😉 … you’ve seen their work and even with Bandai toys … !

Frenzy brothers … we have a new collab with them… they have sculpted a new Captain Maxx !!! which will debut at the upcoming Design Festa show in May. Below is the sculpt with Type A head ;-P 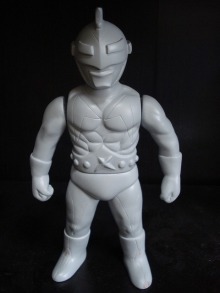 and Konatsu, Makino-san and Myself with our child .. Kaiju King Negora !
I’m a firm believer in a team effort, in fact, in reality most projects are the result and efforts many .. like a Jazz band the idea is thrown out and the others pick up on the rift and take it into various directions .. all the while adding their taste to it .. the final product you hold in your hand is the result of the music we make. I’m just fortunate enough to be in this place at this time and to be connected to them for such projects.

The night continued to dinner and okonomiyaki .. yummy ! 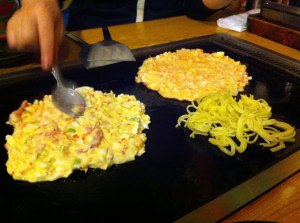 so i’m sitting at a table where 3 of the folks do understand English 😉 and also because Touma-san is known as a Master okonomiyaki maker ;-P as you can see he knows what he’s doing on the grill … in fact he had to run around to everyones table and help cook !

So funny thing as i sit there, the table behind us has some Americans who upon leaving say something like “oh I heard English being spoken ( pointing to my table ) ” .. they had left over beer, so they offered it to us .. but Teresa said to me later, if you look at our table, that I blend in with them .. unless I’m speaking English (!) .. this in a nutshell is my problem when traveling to Japan ;-P
Ya, it may seem obvious, I LOOK Japanese, Duh … but folks speak to me a mile a minute .. unless I can keep up with them, there’s no way I can even stammer out a few phrases … The expectation is I would be a native speaker so i don’t blame them. However, anything short of my speaking fully in Japanese, well that generally confuses ;-P everyone.

So I’ve learned to simply not even attempt any Japanese, sadly … No Nihongo ;-P

In any case it’s unfortunate but i do have good friends who help me out and to be honest, almost everyone 30 and under does understand English .. the speaking may be unsure but they do try and lucky for me.

The night ends and the next day will be the first day of the show… ! Back at the hotel, my clothes smell of grilled food .. and I realize I have only one pair of pants packed for the trip ! gross … I fall asleep quickly …