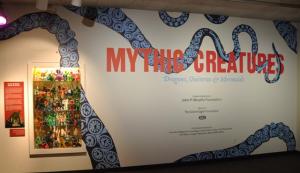 I’m only about 2 weeks away from my Japan trip and have so much to do before I leave. A couple of updates while i have a few minutes to post this …

First up, fellow long time Japanese Toy collector and Youth Programs Coordinator, Science Instructor, Archaeologist and Flint-Knapper for the Cleveland Museum of Natural History, Mark Kollecker, just sent me these pics of his collection, which is part of a larger traveling show called Mythic Creatures: Dragons, Unicorns, and Mermaids (http://www.amnh.org/exhibitions/mythiccreatures/).

Mark had this to say about the exhibit: ” This is a very cool exhibit created by the American Museum of Natural History which focuses on the natural history origins of many mythic creatures and their place in history and importance to many cultures around the world. I was asked to curate a display of some of my toys as part of our installation. Our exhibit design team created a wonderful new entrance way to our traveling exhibit hall and installed a display case which will also be used for future exhibits. I, however, am the first to use it.

I was asked to select “biological” creatures as opposed to “mechanical” ones; to make it look like a crowded Japanese toy store; and was limited to 8 inches in depth for the shelves. I decided to feature Godzilla, Gamera, Ultraman, and modern makers. My last shelf was going to be miscellaneous but when I started pulling SpectreMan kaiju, I could not stop.

I am so pleased with the final outcome. The exhibit runs through 1 July. If you find yourself in Clevo, please stop by and have a look. “

Now if only the whole exhibit was filled with toys like this ( haha ) !

Drool .. 😉 Top shelf has some really nice Spectreman vinyls, while the bottom one has classic Ultraman and Ultra Q figures 😉

Many thanks to Mark for including Max Toys in his display and if you are in the Cleveland area for sure make a trip to the museum and check out the exhibit !

Ok a few quick reminders that the Mandarake Kaiju Dualos goes on sale March 17th, via this link – http://www.mandarake.co.jp/information/newopen/sapporo/sofvi2.html
They will take USA orders as long as stock holds out, so give it a try !

My art show with artist and designer of Kaiju Negora, Konatsu is March 31st – April 1st, 2012, at Design Festa Gallery, Harajuku, Tokyo, Japan. I’ll make a blog about it before I go .. but hope to see friends and fans in Japan very soon !

And April 14th, at the Japanese American National Museum in Los Angeles, I’ll be appearing as part of their Target Free Family Saturday. The theme is Monsters .. I’ll be making an informal show and tell about Kaiju and the process used to make Kaiju toys.

I’ve been asked if I will sell any toys and I think I can .. we are working it out now .. so i will update as we get closer to this event.

OK well I was going to take 2012 easier … but somehow it seems to be busier … hmmm.. how’d that happen ? Wait till you hear about what is planned for later this year ;-P !!!