A few months ago Andy from Kaiju Korner blog site fame approached me with an idea for a special Max Toy mini Kaiju figure set. The idea being I would paint the figures and up and coming artist Irene Fu would add her brush work to them. Irene would also create a special piece of artwork to go along with the set. The figures choosen were Kaiju Dragigus and Kaiju TriPus .. a fine choice I might say 😉 While i ordered the figures from the vinyl factory, Irene finished the art .. a fantastical scene .. of various Max Toy characters having a ball while a Kabuki play is on stage ! I love how this turned out .. each time I look at it i smile and see something different happening ( like Argus trying to bum rush the stage ! )

Below is a few pics of my painting process on this particular collab … each figure was cast in Japan by Master Shimizu-san using white vinyl. I knew Irene would be adding brushwork to them, so i tried my best to give her enough surface to work with .. i think she ended up doing a terrific job on them .. it’s hard to see but the surface is not flat and is undulating and curved .. how she managed to use her brushwork on them .. I have no idea ! Excellent work !

using V color, I laid in the blacks first, being careful about over spray .. especially on white vinyl…

hand painted the teeth .. my work on this Dragigus is done … 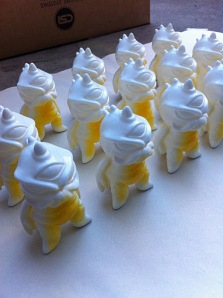 once again using V color , I spray yellow first on these TriPus … 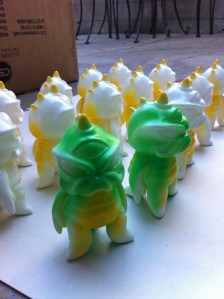 with only the eyes left to spray this TriPus is close to being done … once all 30 figures were done i wrapped them up and shipped them off to Tokyo for Irene to work on ….

And the completed collab figures ! I love the Geisha on the belly of Dragigus … how did she paint 15 of these ?!!? … super steady hands !

The sets will go on sale only via the Kaiju Korner web blog – Here’s the info:

The sale will be first come, first served.
For any questions, you can send me an e-mail at: kaijukornerandy@gmail.com

Thanks everyone for the support ! 😉 These will make good Holiday gifts, too !