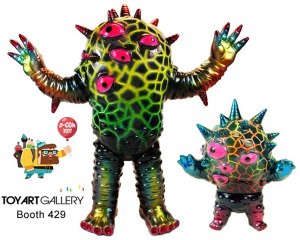 A quick update to let everyone know I’ll have these two custom Kaiju Eyezons at this weekends D-Con in Pasadena. Look for them at the Toy Art Gallery booth #429.

Oh and sorry to say i will not be there, in person … but it looks like a fun time and I’m sure those who go will have a ball 😉
Not that anyone cares ( haha ) , but the only other stateside chance to see me in the flesh will be at SDCC 2012 in July… as of now that’s my only “appearance” scheduled … well not counting being in Tokyo in late March 2012 ;-P

It’s no secret I work pretty hard ( well i like to think I do anyways ) and I decided for 2012 to really concentrate on the various toy and art projects that have been set in motion this year. Curating shows is fun but after 4 years or so, it is starting to take away my time to paint and as you may know painting really is my first love. I’ll still be in and involved in various shows ( in fact am booking up too many for 2012 ) but taking a step back from the curating duties.
Unfortunately science has not perfected a way to accurately spiilt ones self … but this will allow me to finish a few paintings that have sat here for a few years (!)
Oh and a special project will need my full attention … well thats all i can say .. but my art duties will be tested for this one ! Something unexpected from Max Toys I think … which shall be unveiled around SDCC 2012 😉

But fear not, the toys are still what Max Toys is about .. and my passion for them and for showcasing new and upcoming talent remain. I think my upcoming projects will reinforce this aspect of Max Toys.

I’ll have some pretty cool announcements in a few weeks .. including one about a custom I agonized over a few weeks ago … but I think came out good and … ah … i better shut up … least i spill the beans too soon … 😉 It’s a good one and a complete surprise and honor.