Held in Boston at Lot F Gallery, the previews I’ve seen of the pieces from this show are amazing !

The majority of my custom or gallery work on soft vinyl is done with Monster Kolor paints and with good reason. It’s only been a few years but in that time Matt Walker , the creator of the paint line, has turned the custom world on it’s head and elevated the paint being used to a whole other level. I’ve said it before, but if you get a chance to see something painted with Monster Kolor in person that’s really the only way to appreciate the depth of color and effects the paint produces. It is by far the only choice to paint clear vinyl toys with .. the luminosity and ability to actually make a dull finish shine like a well waxed floor can’t be beat.

On top of that you can actually try the paint out yourself, in person at the gallery ! Figures and paint will be supplied and you can learn from Matt himself as he guides you through the process.

I helped Matt out with his Japan version of this show and the response to the paint was impressive. Also to see how each artist went about painting a figure in person to me was priceless … some guys spray like crazy while others only shoot a tiny bit here and there .. there’s no right or wrong way, by the way … the end result is really what matters.

Seeing is indeed believing and I have yet to see a photograph that can show the paint at it’s fullest.

Do yourself a favor and if your in the Boston region go look for yourself… I know you’ll be amazed at the talent on display for this show !

Below are two of my customs for sale at the event. 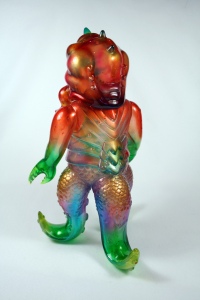 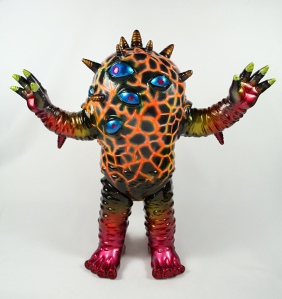