Sorry for the lack of blogs of late, after Comic Con it’s been nuts here .. and here I though I’d have a break.. nope. Besides getting in and selling out of the Max Toy X Konatus Kaiju Negora… I decided to make a special package to put each figure in .. based on a Catnip bag we have for our cat … here’s a brief process of it .. the misses sewed them up ;-P

and once done, each order is slipped into the bag and sewn up ! 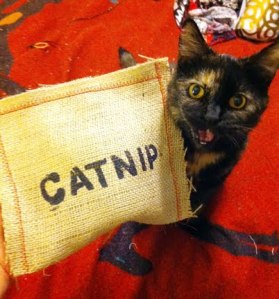 Also a huge box of all black vinyl Kaiju Dualos arrived for me to paint. These figures are big and bulky with lots of textures, making the hand painting process a bit more tricky for me … but fear not I’ve got a bout 15 done, with about 35 more to go. Pre orders and Japan orders go out first, followed by US wholesale .. to be honest I’m getting so burnt out by painting these I’m not sure if I will offer any on my site later. So if you have not pre ordered be sure and contact your local store and ask about getting one thru them ( distro via DKE )

Here’s some in progress shots and how they will look once finished. 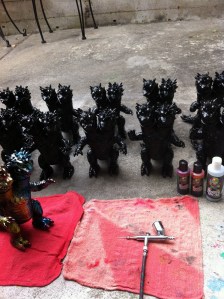 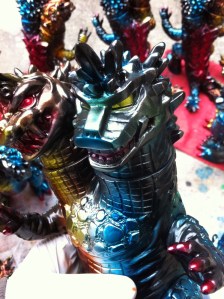 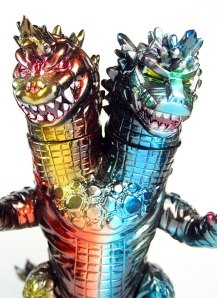 I looked at my calender today and realized that Toy Karma 3 at Rotofugi is in like 3 weeks ?? I don’t have anything for it ..yet ;-P If you follow my twitter ( @maxtoyco ) you’ve seen a glimpse of a winged Kaiju Eyezon .. but otherwise I need to paint much more… After Toy Karma Yajima-san of Dream Rocket will be here in San Francisco for his show at Double Punch called HETEROMORPHISM. If your local please come down to the opening to welcome Yajima-san also he will be doing a painting demo ( details soon ). I’ll make another blog about this show in a few weeks.

following Yajima-san’s show, there’s the Monster Kolor show in Boston, December another show at Rotofugi called Rising Tides , I’m in but will not be attending.

And squeezed in there are plenty of toy releases .. and fingers crossed a brand new figure … but that’s all I’ll say about that for now ..hee hee …

In the next few months I’ll also start talking about a very special 2 person show I have in Japan, for late March 2012, with the ever so talented and popular artist Konatsu !! I am very excited about this show but also very worried .. she’s so good .. I’m not ( > < ) .. I hate to have my artwork even be in the same room with her beautiful stuff … oh well, I shall do my best !!! It will also mark my return to Japan after more than a year .. after I canceled my trip because of the earthquakes.