Mark Nagata’s Alien Argus show at Toy Art Gallery .. it’s always weird for me to see my name attached to this stuff .. I’m not comfortable at all .. but it’s what I do, so I grin and bare it ! I’m not complaining (really) but my natural state is to stay at home in my toy cocoon !
Thanks to Gino Joukar and his Toy Art Gallery, I designed a new character as a standard size soft vinyl toy called Alien Argus !!

Toy Art Gallery is proud to present the first U.S. release of Alien Argus! Alien Argus was designed by Mark Nagata and sculpted by Masami Yamada (of Toygraph), stands 10” tall (“Standard” size), and is ready to invade your toy shelf with 10 points of articulation and two sets of interchangeable eye-stalks!
This is the first U.S. release of the Alien Argus. He’s made in Japan and features a black vinyl base with over 8 separate metallic sprays and multiple paint masks.

Wednesday, February 2nd at 11am Pacific time, and ONLY from TAG .. this first version of Alien Argus goes on sale !

I have to say even though these are painted by a factory in Japan .. they perfectly replicated my color sample !! So closely that I thought the figure I was sent WAS my original paint prototype ! But it was done by the factory.

Each comes bagged with header card and the extra eyes. 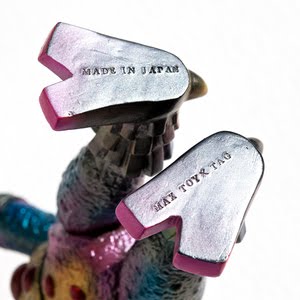 But, that’s not all !… On February 26th, 2011 at the Toy Art Gallery in Los Angeles there will be a huge group art show with over 70+ artists customizing the Alien Argus figure !!
Here’s the list so far … with more amazing artists being added ! .. I have to say the scoop of this show is amazing ! and i’m so gratified by the turn out !

and the ad running in the Feb issue of Juxtapoz :

So all this to say, I’ll be there (haha) in person …and really looking forward to seeing the cool customs that will be in the gallery !