Rounding out the 6 women artists for this project is artist, TERESA. Like all the other images this one does not disappoint ! The subject of TERESA’s art works are of women dressed in Kimonos .. and at first glance you may think the women in this art is simply just that. You’d be wrong of course, as you gaze upon the lovely face, you will see the third eye of TriPus ! Is she good or evil ?! Its not really clear and left up to the viewer to decide … the face has a very pleasant look but the tentacles that are emerging and flow upwards into the hair speak of a more menacing situation. And if you stop and think about it you are under water as you view this, so i would say it’s most likely not a good situation !

TERESA’s rendering is at once powerful while her line work is delicate and flows nicely… all while maintaining the classic Japanese wood block print influence of the past. For sure the Kaiju world is not a normal venue for this artist, but i think TERESA has been able to cross over from her world into the monster realm, without losing her style and outlook. TERESA has also managed to keep the theme of “3” in her TriPus art, too … 3 tentacles, 3 pieces of hair flowing, 3 eyes, etc .. Nice !

The following is TERESA’s artists statement. Thanks to my buddy, Yo Miyamoto for his translations and support of this project ! I’ll also post an interview with her soon !

Graphic Designer / Illustrator
Teresa is an tireless artist who has been working under the style of Production_Genmu.
She has been releasing her artworks not only via illustration but also in multiple media such as YUKATA (kimono for Summer), sundries, designs, art direction and live performance.

Many of Teresa’s artworks have been created in the motif of KABUKI and plays. She calls herself as KABUKI-OTOME-ESHI who express girl’s unchanged but biased inner strength and weakness of their romance in various method. 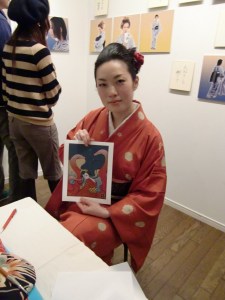 above TERESA hand signing the giclee prints during her own recent art show.

I look forward to meeting TERESA on my next trip to Japan ! For sure I have a ton of questions for her about her work ! I’m intrigued by her artists statement above (!) and yes, I’m a Boy, so she will need to explain more about a Girl’s inner strength (!) .. which i suppose I will never really understand ;-P ha ha …Perhaps a form of Girl Power ?!!

This awesome image of Kaiju TriPus was part of the Beauty and the Kaiju art show which was held at Design Festa – West- Harajuku, Tokyo, Japan on Dec 22nd, 23rd & 24th, 2010.

Giclee prints, signed by TERESA are now available for sale via my web store, http://www.maxtoyco.com.

And in February 2011, the project moves to Rotofugi in Chicago, with an added bonus we will reveal very soon 😉