Beauty and the Kaiju Show Opens in Tokyo !

Courtesy of Toy Buddy and all around good guy, Andy of Kaiju Korner blog who from his secret hide out in Japan has been reporting about Kaiju and Sofubi events … he brings us these pictures from the duel events, Kaiju Invade Harajuku and Beauty & the Kaiju !
Please visit and bookmark Andy’s blog for more pics about this and other events !

Being based my self in San Francisco, I could not be at this event ;-( sniff … but my right hand man, Yo-san set up an amazing display !!! Check Andy’s blog for coverage for SunGuts, Dead Presidents Designs and Dream Rocket … I’m going to focus on the Beauty Project !

Each woman had her section complete with Biography, Print or Original if available, and a nice display of the character’s toys. 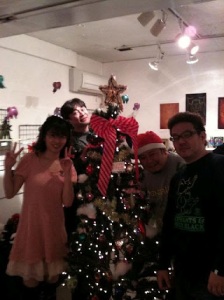 I love this picture, I call it Beauty and the 3 Kaiju ! From left to right, artists Tulip, Yajima-san Dream Rocket, Ichimiya-san SunGuts, and Mystery Sofubi Man.

Being that Japan is one day ahead of us in the US, it’s actually the last day the show is up … but fear not, any stock left will be made available via the Max Toy webstore – http://www.maxtoyco.com/Shop_home.php – and don’t forget, the Beauty & the Kaiju show is not over .. in fact it will move to Rotofugi in February 2011, along with a twist 😉 which we will reveal soon ! 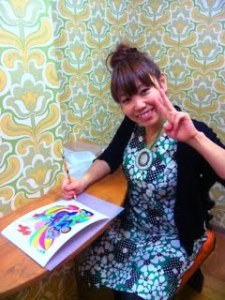 My Thanks to partners in crime, SunGuts, Dream Rocket, Dead Presidents Designs, Andy-san, Beauty & the Kaiju Artists Tulip, Namiko Sonobe, Konatsu, JoBo;LuBo, Hiroe and Teresa .. and of course the King Pin Yo-san … what a great show and a perfect way to end the year !