Beauty and the Kaiju Project , Part 1

Those of you who follow me via twitter ( maxtoyco ) know that I’ve been burning the midnight oil of late ..I feel like starting with my trip to the Morikami Museum in Florida till now, I’ve been on a never ending treadmill of Kaiju Fun !

Well I can say that its been Fun now that most of the work is done.. I’ve just completed 6 pieces of art for the upcoming Beauty and the Kaiju giclee print release December 22nd-24th, 2010 – Design Festa Gallery Harajuku, Japan.

To recap, we asked 6 Japanese women artists to illustrate one of the Max Toy characters, so in this case, Eyezon, TriPus, Xam, Argus, Drazoran and Capt Maxx. The project is two parts, the first being the release of these signed prints in Japan. The second part being another release of the prints but with custom figures at Rotofugi in February 2011.

In the next post i will start to tease the artwork these women did ( Amazing !!! ) as well as a interview with one of them, artist Tulip ( Sachiko Yabe ).

So, stupid me … I suddenly realize what I got myself into … while each woman did one piece of art, I figured out I was paired up with each .. meaning I had to come up with 6 pieces of art ! OH FFFFudge ! ( you know what i mean ) …

Ok so after a few minutes of panic I had no choice but to get to work … below are a few of the many pictures I took and tweeted over the last few weeks. I barely made the deadline, but did .. phew !

So as of today, all 12 images are at the printers, Picture Salon ( http://www.picturesalon.com/ ) .. for giclees and prints I highly recommend them !!! Most excellent service and the prints are always perfect and awesome !

The format was to fit in a 8×10 inch dimensions .. so i cut 6-8×10 inch Crescent Watercolor boards, heavy weight.. and started sketching directly onto each board, each character. I really didn’t have much an idea of what poses or such i wanted for each character.. but I did know that several of them would be up close portraits .. like a High School photo.

Below, I’ll show the Drazoran and the process I used. For the most part it’s the same on the rest of the pieces and for that matter whenever I paint. I always start with a full pencil rendering on the board. Using HB to 6B pencils I sketched in a Drazoran head …

Once the basic shape is on the board I start to tighten the sketch, alternating between light sketch marks and using a kneaded eraser to remove unwanted lines …

above, is the nearly finished under drawing, with some paynes grey acrylic paint blocked in the darkest areas.

and an over view of all the characters sketched in on the boards. The only one missing was Captain Maxx. Because I knew i would run out of time, I decided to use a pen and ink drawing I had of Maxx, and color it via Photoshop … something I really didn’t want to do but in the end had too .. and was Ok with it ( see below ) 😉

Once the under drawing is done, I use 3M removable tape, and tape around the outside of the figure. I’m getting ready to airbrush, so I need to block off the background .. to prevent any spray from getting on it, plus it helps create a hard edge around the figure. I use a Iwata HP-B airbrush, and sometimes a HP-C for larger backgrounds.

I go back in and using an Exacto blade #11, and lightly cut around the outside.. taking care not to cut too deep … I’ve airbrushed over 20 years now, so this part of the process I could do with my eyes closed 😉 and given that I was staying up till 2-3 am .. my eyes most likely were closed ! 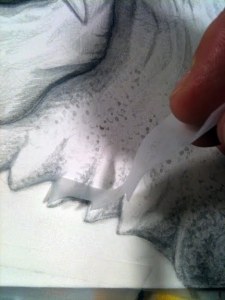 here I’m lifting up a piece of the tape that reveals the figure below. Sometimes i will save these pieces, like a puzzle, they can be replaced and the opposite one taken off to spray over …

you can see how the area around the figure is blocked off by the tape, I also use tracing paper to further block off any areas I don’t want paint to get on.

I know I want a bit of texture to the skin of Drazoran, so using my sponge I lightly press in some texture with purple paint. 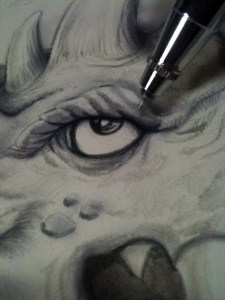 I always remove the front tip cover on my airbrushes .. I find it makes it easier to wipe off excess paint build up as I spray plus I can get close down to the board and spray really tight areas… I slowly use Acrylic paint to build up the colors on the figure …

taking a step back, you can see the overall colors coming into play…

and here lifting the tape you can see how it has blocked off the background.

the basic spraying is done at this point, so i remove the tape and tracing paper and now do the same process but this time masking off the figure from the background. Again cutting around the figure and removing tape…

the background is a nice thunder cloud type .. lots of fluffy clouds 😉

I first spray in some blues at the top and bottom, with yellow tone in the middle part.. this will act as my base for the clouds to be on. 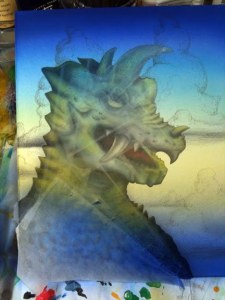 Again, building up colors and this time using color pencils to quickly drawing in the smaller details . and going over that with more airbrushed colors…

I will pull back the masking every now and than to see how the values are working .. I don’t due very subtle work .. I go for impact, I guess it’s the little Boy in me 😉
ONce all the masks are removed I spend many more hours with a paint brush and the airbrush going back in to tighten areas, add textures and soften edges.

Finally after several days and many hours the pieces is nearly done. Its good to go for the giclee, but I will be going back in to tighten a few areas and finally a nice varnished glossy coat to seal the paint. 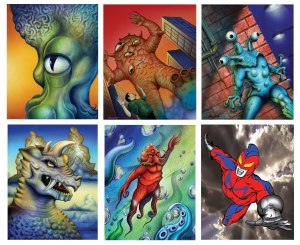 Above, the 6 pieces I created for the giclee project ! Overall I’m quite happy with them all, and yes even the Photoshop one ;-P …I think they each hold up by themselves but also work well as a group… and i hope you like them , too.

The next blog, I’ll preview the super talented women’s artwork for this project. I can’t stop raving about their work .. and I know you’ll love them, too !