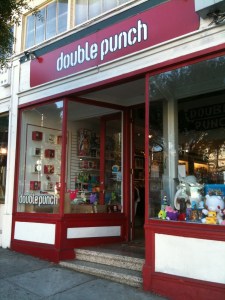 Saturday, Nov 13th, 2010, was the opening of the Kaiju Bazaar show at Double Punch in San Francisco. Denise and Omar ( the owners of Double Punch store and Ningyoushi.com online) had approached me many months back about doing a follow up the Kaiju Invades San Francisco show from December 2009. This time the theme would be centered around Japanese food stalls .. so Kaiju served up as food !

So with that in mind I drew up a really simple sketch of what we might be able to do in their gallery space .. of course the drawing was more complex than we could really do, but it at least gave us a starting point for how the show could look. 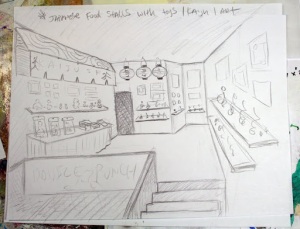 Because I’ve over booked myself this year, I did not get started on the customs for the show until the week of the show, and I knew we would need to have those over hangs painted to add to the Japanese feel. Lucky the faux over hangs were not too hard to make, and a trip to the Daiso store remedied the problems of hanging lanterns and flags.

The evening started with this awesome grilled Saba for dinner .. yummy !

But to back track a bit, earlier in the day we showed up to help Denise set up the show … Each artist had a “food stall ” set up. So with that and my simple sketch each section began to take shape over the next few hours … Below, I’m using the “Force” to help out Denise 😉 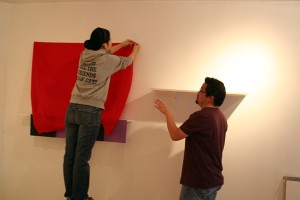 My section is starting to take shape ! 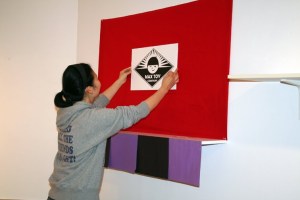 Doing my best Spiderman imitation as I try to hang a banner ….

taking a short break I let this mysterious collector, “H-man ” look at the upcoming Alien Argus figure being released by Toy Art Gallery. He likes it 😉 and counts the extra articulation as a big time bonus ! 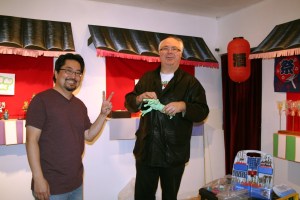 finally the set up is done .. as you will see in the next few images, I think we did a good job at replicating the Food Bazaar feel. Below, we have the Uamou section ….

all the figures above sold out quickly … ! 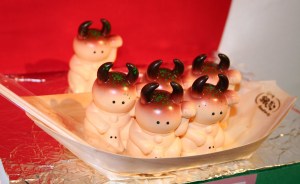 Uamou’s Takoyaki , take out tray .. my personal favorite, and it sold out quickly.

As the evening got going, Omar was busy marking pieces as sold as well answering any questions folks had… I think he’s giving two thumbs up ! 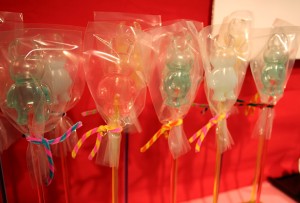 Uamou, really went all out with our theme ! Above, here we have lollipop versions of her characters. Very Cute ! 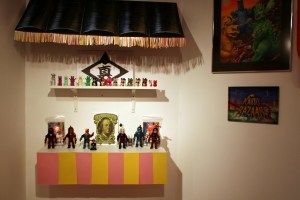 On this wall we had on the top shelf, RealxHead and below Dead Presidents Designs. 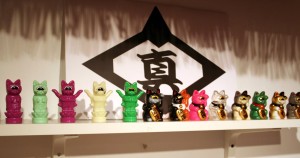 RealxHead had an array of minis, which did not last long … as many sold out ! No surprise at all ! and how can you go wrong with anything Cats ?!!

Matt pulled out the stops with his HazMat figure .. many of them sporting unique hoses, and guns mounted on heads ! The addition of Zombie-like paint schemes and splatter effects really made for some stand out pieces .. but we already expect that from Matt !

This wall has PicoPico .. like many other pieces in the show, practically everything sold out by nights end ! The smaller pieces are actually resin pieces in various monster forms … Neato !

Hand painted, with a nice wash of color to bring out the details, by PicoPico .. and yes, sold. 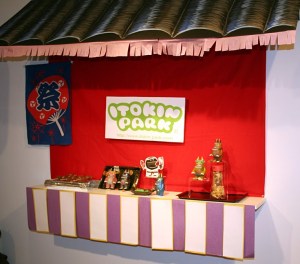 Here we have Itoken Parks section.

Itoken Park didn’t have a big quantity of items, but no matter, these beautifully painted figures lasted all of a few minutes and sold out 😉 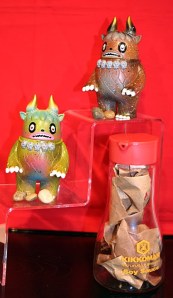 and finally, some fellow named Mark Nagata / Max Toys .. displayed his stuff along this wall …

Kaiju Dragigus on white vinyl … I used a color palette I don’t normally use ;-P 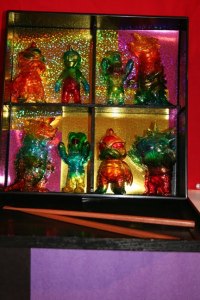 Rainbow minis in a Bento Box !

and in what was to be the highlight of the evening for me, Jay222 presented me with these amazing figures he hand sculpted as gifts !!! .. now get this, if you look closely they are made from the top and bottom of a mini Eyezon figure ! 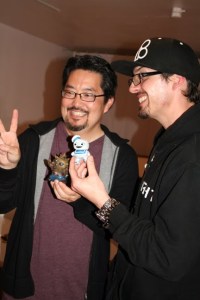 Using Super Sculpey , Jay deftly added details .and made Eyezon into a Ghostbuster !! 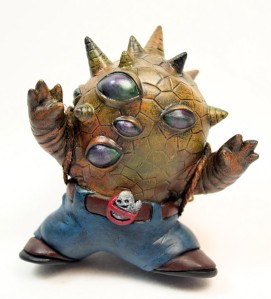 and the back pack ! 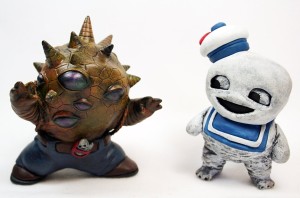 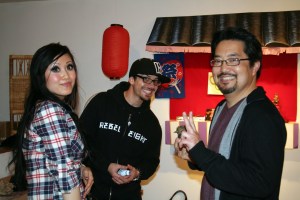 So with that the evening winds down, a good portion of the show has sold and it’s time to leave. The view above is from the parking garage on Vallejo street, which is a good place to park if your going to visit Double Punch at night. Thank to everyone who came out to see the show ! I know I speak for everyone in saying we all appreciate your support and well wishes !
My next show will be a group Kaiju show at Dragatomi in Sacramento on January 8th, 2011 ! I’ll post more info on that soon … 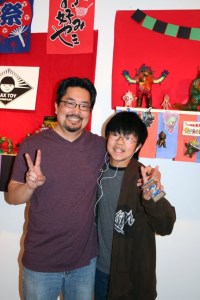 ah, Max is growing up way too fast, which of course means I am getting old fast … ha-ha … !