well I just got back from another amazing trip to Japan .. sheesh, when are they not amazing ?!! Well sit back and over the next week or more I will be posting various parts of the trip along with my comments … but first it so happened that my visit to Japan was the same time that Medicom Toys and their Project 1/6 store was showing the soon to be on sale, exclusive colorway of Kaiju Dragigus and Alien Argus produced by TAG Toys, figures ! We were able to met up with President/CEO of Medicom Toys Akashi-san at their headquarters.. he’s the well dressed fellow on the left side, I’m the lumber jack ;-P
Had a great sit down with Akashi-san .. found out he’s actually about the same age as both Yo and myself .. and he grew up with Bullmark figures.. thus his love for the soft vinyl figure, and Kaiju ! I have to say i’m so glad that a major company like Medicom has a leader who collects and enjoys soft vinyl Kaiju .. a rare thing indeed !
Akashi-san made us feel right at home and we left with some excellent toys ;-P 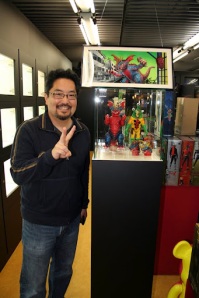 The next day we popped over to the Medicom store, Project 1/6 in Shibuya to see the Kaiju Dragigus and Alien Argus on display along with the original header card art I gave to Akashi-san.. Sorry to say they are only for sale within Japan and via the Project 1/6 web store. So this would be a good time to get your buddy in Japan to order one .. I believe the first week of November the offer will go up …you can’t tell but I had just been soaked head to toe with rain .. I was standing there with wet shoes .. yuck ! So instead of enjoying the display I could only think about my wet socks and shoes going squish, squish … ha-ha …
Next time, the October Japan In Living Kolor trip .. phew I had to write notes so much went on !!!