Here’s a piece of art i just did for the upcoming Kaiju show at world famous Double Punch in San Francisco ! The show is titled Kaiju Bazaar, ya Bazaar like a shopping market place .. ha-ha .. Oh you will see why it’s called that soon enough 😉 And they will be announcing very soon whose int he show it’s gonna be a good one ! But first, another one of my step by step thingys … after kicking around a few ballpoint pen roughs

we decide on one direction and I proceed to start the final painting.
So I start with a nice 14 x 9 inches, heavy weight board by Crescent. I like the hot press surface and pencil directly onto it with a HB and 2B Berol pencil. If I’m looking for a bit more texture i will use a cold press surface ..or even gesso the board, but because of time constraints it’s hot press. Any ways, I start with loose pencil work to rough in what goes where ..

as i go along a tighten up the pencil work …notice the creatures eye at top “dots” the “i” in Kaiju ? niffty, yes ?! 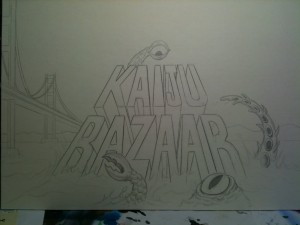 Some indication of values are blocked in … this being a group show I didn’t want to put one of my Kaiju or someone else .. just tried to hint at creatures in the Bay …

Yes I know these San Francisco landmarks aren’t all lined up like this .. heck it’s a fantasy scene ;-P…can you name all the landmarks? Look for TransAmerica building, Alcatraz, Golden Gate Bridge, Sutro Tower, Coit tower … 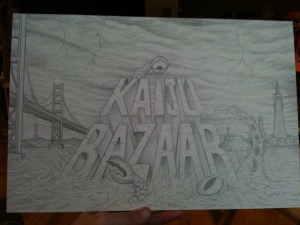 pencil stage is done, I lightly spray fixative the drawing and move on to under painting with paynes grey acrylics with some matte medium and water .. using a 1 and 00 sable brush I darken up the pencil work and wash in medium to dark tones … 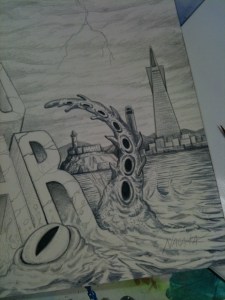 after I’ve worked may way across the board, it’s time to airbrush in the sky using the same paynes grey mixture ..oh the words have all been masked off with 3M removable tape .. I don;t use frisket anymore, as it lifts up the paint sometimes and really I don’t mask off stuff in my work too much anymore .. 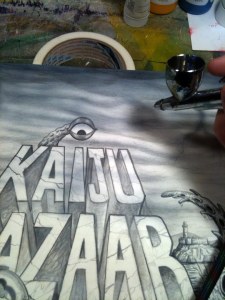 above, you can see the masking pulled back .. it protects the words from being sprayed .. I’m checking if I went dark enough.. and yes looks good to me 😉
Now that the values are set, I start glazing in the colors, starting with the sky, I lay in transparent yellows, reds, blues ..

going back into the background and painting the landmarks, here the Golden Gate Bridge…

at this point the back ground elements almost done, I’ve added some red oxide tone to the title with a paper towel .. to just give it a quick wash of color.. now to mask off the title and start adding a stone-like texture to it …

using my Iwata HP-B I take the nozzle off and lower the pressure to allow a splattering effect .. using red oxide, mars black, and some forrest green I add paint to the title ….

removing the title masks clean up the edges and add tones ot the creatures around it .. 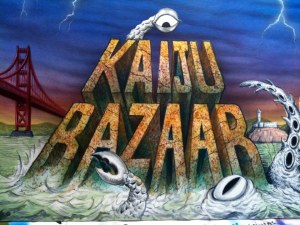 at this point it about adjusting values, darks and lights, and cleaning up edges ..

lots of work but I can see the finish emerging 😉

and that’s all there is to it ! The final piece was clear coated with Monster Kolor and will be on display and sale at the show in November. Hope you enjoyed this, for those on Twitter you saw this live over a few days 😉 you can always see what I’m up to or follow me via Twitter, under ” maxtoyco “