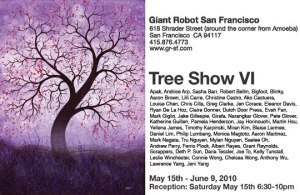 UpDate: 5/27/10 – Thank you ! Both items sold at the show 😉
Was invited to participate in the San Francisco Giant Robot Tree art show, their 6th one for those who are counting … actually I’m not sure why I was asked, I mean I’m a nobody and and old guy at that … nothing “hip” about me at all … well, it’s always nice to be asked.. so I said “Yes” before they retracted their invite ;-P
I thought about doing a straight non Kaiju piece of art but decided to do my “Tree” thing with my good buddy Kaiju Eyezon. I was asked to do 2 pieces of art, so the first thing to come to mind was a botanical drawing of Eyezon .. kinda like a turn of the century engraving with muted colors came to mind… so i proceed to draw up what i thought Eyezon would look like if he was growing in a forest… well he is spawned from a potato ( for those who do not know ! ) so not too far from his roots ( ha-ha )

I knew I want to go for a hand drawn and hand colored or tinted look, so I made sure i kept the colors muted and the over all color look limited. 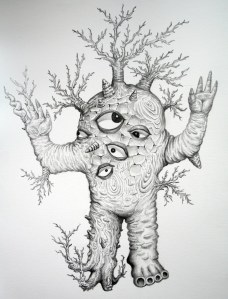 I thought about using pen and ink over my drawing but decided to keep it simple, so after the pencil was done I started glazing in colors with acrylics and matte medium.

slowly building up the colors till I was done. 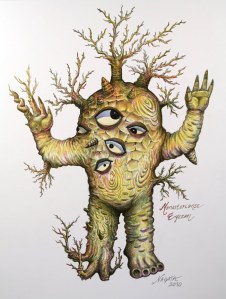 Over all size of the drawing is 8.5×11 inches. Pencil and Acrylics on acid free paper.
This took about 3 days to finish, while also working on the custom below.
==================
Next up, I wanted to have a customized Kaiju Eyezon … using Apoxie Sculpt I started roughing in the areas I wanted to have wood like texture and tree-like projections.
I didn’t want to totally lose the over all feel for the character, so i kept the height of the tree parts low. I thought about a massive tree on top.. but again thought that would be too much. 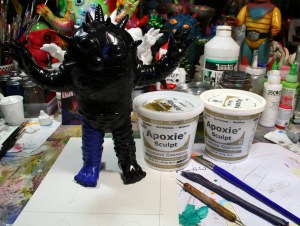 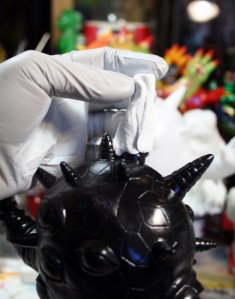 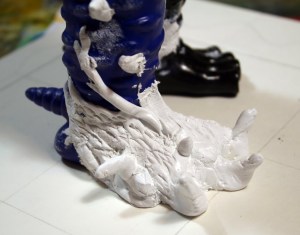 Once the Apoxie Sculpt was dry ( about 24 hours ) I started using Matt Walker’s new paints, Monster Kolor, I first spray in a black base coat. Some of this process is in the video below. I also laid in some yellows and greens to the individual vines and such on the foot.
Over all I kept the figure dark, because I knew i would spray a nice color change glitter coating onto it .. the darker colors help this glitter coat to show up ( see the close up pics ! ) It’s been said more than once that you can not photograph this type of coating .. and it’s so true.. but think of a holographic rainbow effect 😉 the depth of the colors are really nice. 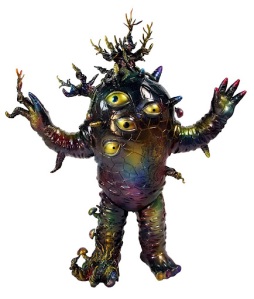 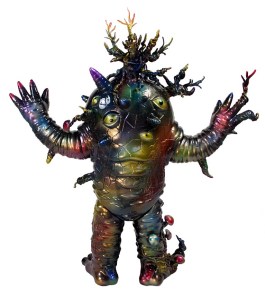 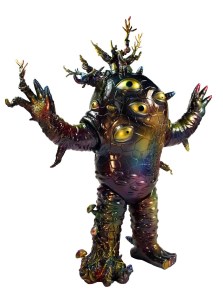 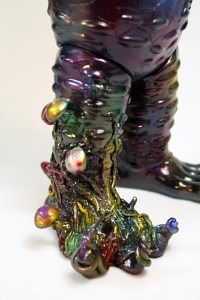 was fun spraying the mushrooms ….

my weak attempts at trying to photograph the color change effect .. well here’s some outdoor pics too … the colors really do shift depending on the light. 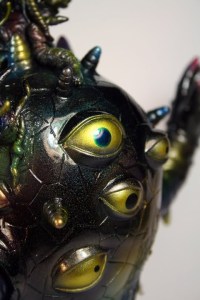 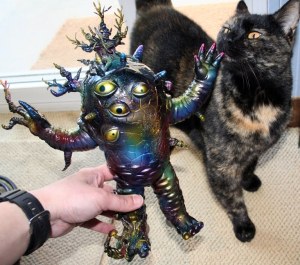 If my cat likes it than it’s a good one 😉

Brief YouTube video of me spraying in the initial colors:

Giant Robot is proud to present Tree Show VI. In the tradition of its predecessors, this group exhibition will feature arbor-inspired pieces by painters, illustrators, and other creators from street art, indie comics, printmaking, design, and crafty art backgrounds