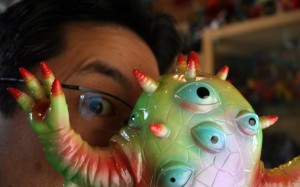 *** Update 4/21/10 – Thanks to Max Toy Club members this figure is now sold out !***
I’m not a machine .. although sometimes I wish i could be 😉 Case in point when i attempt to paint more than one of anything. Ya, my Japanese counterparts can crank out their painted toys with their eyes closed .. and seeing master painter Goto-san spraying a figure in like seconds really hit home what a novice I am to this Japanese toy making. But I do have to paint my toys from time to time .. yes, that is one of the ways I earn my living with Max Toys 😉
I have an upper limit of about 20 to 30 pieces .. anything more than that and to be quite honest I not only lose interest, but just can not do it ;-( …weak American that I am (ha-ha)…
My character, Kaiju Eyezon, has proven to be the most popular of the characters I’ve created, so painting him (it) is always a crowd pleaser. 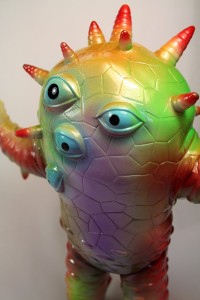 This go around I decide to opt for a more lighter feel in my paint scheme .. I usually go for the darker, metallic look. Working on this figure, which stands about 10 inches tall and is cast in white vinyl is fun, but it’s got such a large surface area there’s a lot of paint that must be applied. 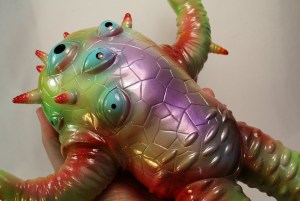 Using Monster Kolor, I think i achieved the look I was going for. This color scheme actually harkens back to the first Kaiju Eyezon release …I didn’t go all crazy with metallic flakes every where, although they are present in some of the pearl colors.

I don’t have a color theory per say… sometimes I look at old Bullmark figures for inspiration. Or visually I like to use darker colors that fade from top to bottom or vice versa .. or use warm colors on the tips of the horns to keep your eye flowing around the figure as you look at it…
But more often than not, I like the way paint will lay on top of each other and create new shades and colors. Only by layering or glazing colors..while also sitting on top of the white vinyl, can you create these colors. And finally after 2 days of this back and forth in layering I clear coat all of them. The clear coat really brings out the colors, any pearl or metallic effects .. and basically brings a depth to the paint work you will not achieve without it. Like a nice oil painting, there’s no way to show you what i mean unless you see the work in person .. someone said it has to do with the fact that we “see” with our two eyes, thus bringing depth to objects or even seeing glitter effects on these toys .. but the camera flattens out the depth..thus you can not see all the glorious colors 😉 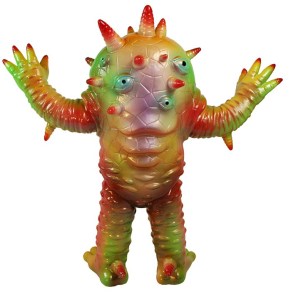 and here’s a short video of me spraying away 😉 Not too exciting really, but no one said being a Kaiju toy maker was all glitz and glamour .. sorry to burst your bubble.

This version will be released via my Max Toy Club early next week, and if any are left I’ll post them to the Max Toy web store .. so check it, oh about mid week or so. Enjoy !