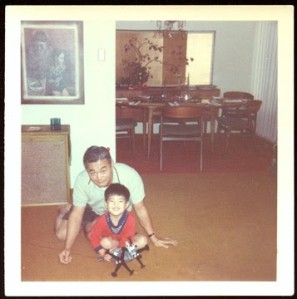 I think it’s safe to say that most of us collectors are collectors because of our childhoods. Some of us had not so great childhoods, and collect to make right what was not … in my case, I had a pretty darn good childhood ,not perfect, but heck what is perfect? My Dad was not a collector at all, in fact he really had no interest in the Ultraman collection I amassed later in life .. but he always indulged my toy wants and sometimes he would say he favored one type of toy over another 😉 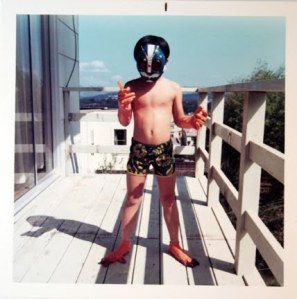 my childhood was also filled with time to play and imagine … and not endless after school classes ;-P I’m not sure what I was thinking in this picture, but yes that is me in a Kamen Rider mask, with rubber gloves on my feet and hands (!) I was about 9 or 10 years old.

It’s so true you only get one childhood, and for sure I’m making sure my son Max’s childhood is no different than mine… but i suppose the biggest difference is my love of toys and the spirit of toys .. and I can tell I have passed on that gene to him 😉

Which leads me to my fellow Toy Comrade … artist Ralph Cosentino. Every time i talk to Ralph I’m floored at the amount of projects he juggles all the while holding down a full time job at Hallmark cards (!) From illustrating Batman / Superman books, making his own toys and characters and more (!) phew … what the heck I’m a doing ?!!? But it’s his child-like enthusiasm that I always pick up on .. and I think that is what keeps us both excited about our various projects.
One project I’m waiting for are these awesome pillows he’s got coming out .. graphics by Ralph and hand made by his wife !

I know he’s got much more cooking … so follow his blog and watch them unfolded over the next few months .. some really exciting stuff ! Follow Ralph on his blog here