What follows is my semi rambling blog about my trip to Japan and the Kaiju Comrades 2 art toy show in Tokyo, March 9th-16th, 2010 ….

Having arrived in Japan on a Wednesday evening my good friend and fellow curator of this show Yo picks me up from Narita airport. Then off to a nice dinner and talk about the impending storm of art pieces still to arrive.. to mount a show like this containing 42 artists and over a hundred pieces, one must deal with all types of personalities ( well, you know how those artists can be ?! ) We talk about whose got their stuff in on time and those who have not.. I’ve done and seen enough shows to know this is how it goes and really not to sweat the details. But still nerve racking when your trying to make name tags for the art pieces and such…
It’s late and we start early so time for sleep … of course, I proceed to get up at 4 am, 5 am, 6am, at which point i say heck I’m wide awake and up for the day ! 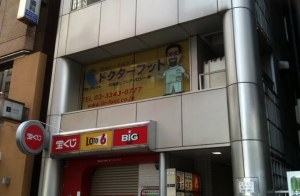 It’s Thursday morning we catch a quick breakfast and head our way to the Shinjuku station.. as I glance up i see this guy ( pic above ) Geez, that looks just like me I say .. I’m Dr. Foot ! Well, being of Japanese decent I suppose there is a good chance my doppelganger is walking around here in Japan ! 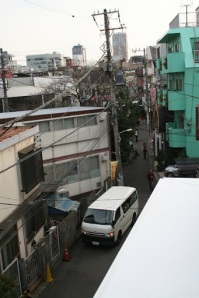 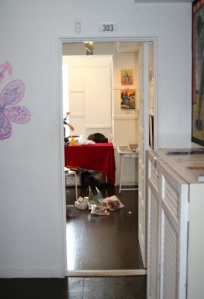 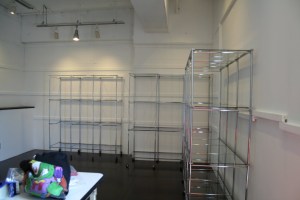 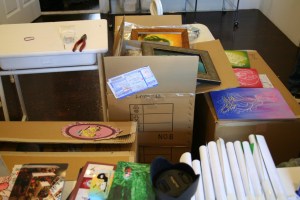 An empty gallery is like a blank canvas .. so many possibilities ..what will this show look like ? Will anyone show up to see the show ?! Will it all fit into this space !
One by one different artists arrive to help set up and to bring their artwork in. Some of these artists I know , like SunGuts, Dream Rockets, Hariken, while others I’m not sure who they are and it’s at these times I kick myself for not learning Japanese …
Soon the shelves are assembled and than a huge shipment of boxes of all sizes arrive. Fueled by Pizza provided by SunGuts we begin… 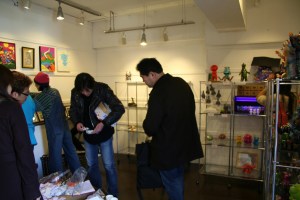 I’m so thankful that even though I can not fully communicate with each artist they freely give of their time and everyone dives in to help hang and display the work… care is taken to give everyone a nice presentation and every now and then, we stop to admire someones work or laugh at my lack of Japanese or broken English ( Engrish ) being tossed around. It’s at this moment it strikes me… it’s really not about the toys or art, no, it’s about these connections and moments. I digress .. many of you know i collect Ultraman toys.. I suppose rather obsessively some will say …but the past few trips to Japan I’ve done less toy searching and shopping. This time I didn’t even set foot into the Nakano Mall, nor any vintage toy store .. it’s not that I’m not interested but have reached a point in collecting that there’s not much left I’m looking for ( at least in an affordable way )
Back to the gallery set up .. and what i now collect is Memories .. I’m collecting memories and experiences. And it dawns on me that these memories are the ultimate collectible.. unique to each human being, no two being the same .. my pictures of this show and trip, my writing about it .. all unique to me. It may be that I am more sensitive to memories having seen and presently dealing with relatives with Alzheimers.. but toys come and go, they sit in your collection and than move onto the next collector.. we enjoy them for a time and move on …these connections with people are what propel me to do shows like this. 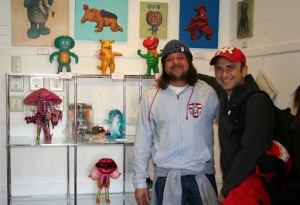 Carlos Enriquez Gonzales and Gino Joukar ( Toy Art Gallery – TAG ) stop by during set up .. Carlos is from Venezuela and as many of you know creates show stopping sculptures.. many of which are adult in nature 😛 Gino is a great collector and supporter of many artists around the world and in Japan. I joked to Gino that i don’t come down to see him in Los Angeles, but we met in Japan 😉 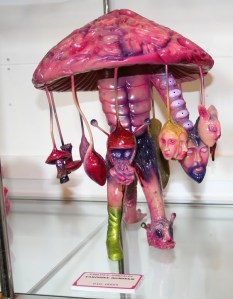 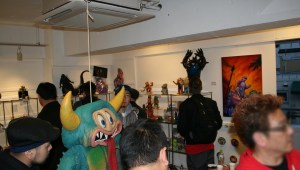 we had a deadline of 4pm before the invite only reception began .. mostly for artists, friends and press … it’s 4pm and we still had a few more pieces to hang… the pressure mounted .. but everyone got a second wind and in what seemed like a few seconds all the empty boxes where stashed away, the trash was picked up and the show was done ! phew … more artists arrive and in few hours we all move to have dinner next door. 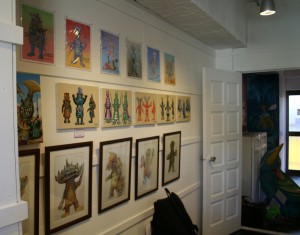 I decided not to take photos at the dinner .. I guess one because i was tired and wanted to just eat and secondly, I felt this was just a nice gathering and not a media event for me to post up later .. if that makes any sense ?… Everyone had a grand time and as the evening wound up, everyone stood up and gave me a standing ovation (!) much to my horror ;-P Geez, where’s Yo ( my translator and computer , ha-ha ) I look over at him and he says, say something ! Crap, now where’s my Japanese ??!! I mumble something lame, like Thank you for your beautiful art and support ..now you can go home ! There’s a pause and a few chuckles but no ones budging … hmmm, it’s times like this that stump me, culturally speaking … I guess my speech was too short so i say something else, which is now lost to the ether .. I guess that worked as folks started to file out … oh well, guess public speaking is not on my list of favorite things to do ;-P The night was over and the next day ( Friday ) would be the first time the public would see the show. 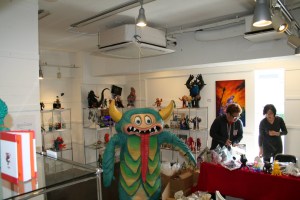