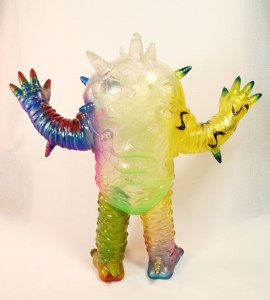 I’m still recovering from the last 6 days of the show, several get togethers, and kaiju stuff ! .. also way behind in posting pics .. you’d be better off checking out some of these sites for complete pics and such : ToyBot studios, Kaiju Chronicle, Kaiju Art, and Jeremy Brautman’s post here ….. in between this madness, Ichimiya-san (Sunguts), Yajima-san (Dream Rocket), Matt Walker (Dead Presidents Designs) and myself .. got together at my place to do a jam painting session on a clear Kaiju Eyezon ! If I am not mistaken this would be the first time 4 Kaiju artists have gotten together to paint on one toy ! We decided to stuff a glow in dark Neo Eyezon inside, as well !!! I was first up and did the left leg, with metallic silvers and glazes of blue, red and yellow, and some gold hmmm, an Ok job but I was nervious as the first one to paint.. what was to follow made me wish I had just let them paint the whole darn figure …. 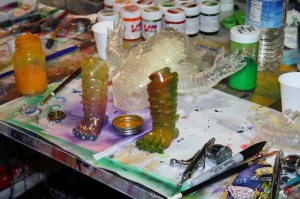 next up Yajima-san, blew us away by schooling us big time in how to paint a Kaiju (!!) I don’t normally swear .. but I did in this case … he pulled out all the stops .. and on this darn little leg .. sheesh …. 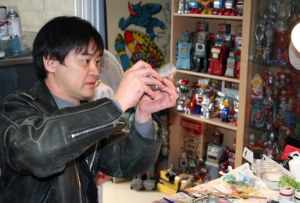 next up Ichimiya-san showed why Matt and myself are simply still in Kaiju painting school .. making a mask out of tape, and spraying various colors, Ichimiya-san turned the left side into a colorful masterpiece ! 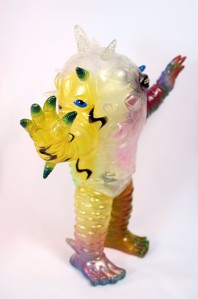 Finally, the American Kaiju painter whose paints have changed the way we all paint, period, Matt Walker took over and sprayed some awesome color combinations 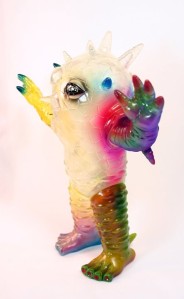 on the right side, and of course added his trademark Pin Stripe to the eye ! 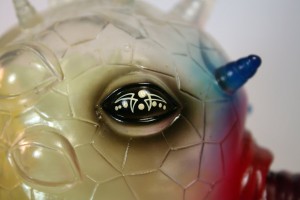 Over all, we all had fun watching and learning how each of us tackles Kaiju painting .. the session was all too short, but we will try again in March in Japan, during the Kaiju Comrades 2 art toy show. I want to thank each of these talented artists for their support and friendship. So if your wondering what happens to this figure, well we will be auctioning it off to the highest bidder…more details soon posted !