Ok you’ll have to excuse me.. I just got these two vinyls in and I am at a loss for words. Simply put these are some of the finest Japanese hero vinyls I have laid eyes upon in a very long time. I am very partial to vintage vinyls and I feel both of these hit the mark dead on .. not too mention both are in giant sized form 😉
First up is T28 or Tetsujin 28 by M1 Go of Japan. M1 is legendary for not only starting the whole retro style vinyl toys for collectors way back in the 80’s but also for it’s owner Yuji Nishimura who has the largest soft vinyl toy collection in Japan and the world. He even has a museum that houses way more than 10,000 pieces of his collection, TV and movie props … you name it, he’s got it !…and in the Japanese collectors world there’s no one even close. Yuji’s always made beautiful toys and models with an attention to detail that fans and otaku appreciate.. not just replicating a character but creating a new retro style figure that has that spirit or “it” factor that a true fan feels when you hold one in your hands.

This particular figure really hit it home for me, the girth, the sculpt and classic paint job .. I love it ! I have to say there have not been many toys of late that have taken me back to my early days of collecting, but somehow this one really managed to do that for me. I swear a smile came upon my face when holding this figure..something that I am sorry to say has not happened with toys of late ;-(

Standing at about 19 inches in height, this figure commands attention, without being so big that you have no where to put him 😉 As per usual, all parts are perfectly trimmed and painted… in a shameless plug I have one ( only one ) for sale in the Max Toy Company web store ( ha-ha ). I’m not sure how M1 Go can top this .. but if anyone can, they will !
Well, not to be out done I was also finally able to get my hands on this Magma Taishi ( aka as Goldar from Space Giants show in the USA ) giant sized figure from Denboku. 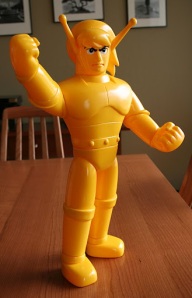 Much of my comments for T28 are the same for this one, spot on sculpting in the Manga style, this one sports many more points of articulation, at the wrists, and ankles, antennas and hair ;-P … Denbouku is known for this type of style of figure and all are beautifully done and forget about trying to get some of them as they instantly sell out at Japanese toy shows. 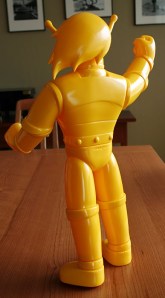 this figure will be tougher to track down, I don’t have a line on any others but you can always try yahoo Japan, via Celga services ( a middle man auction bidding service )

Ok I’m done gushing about these new pieces to the collection, it’s probably a good thing that these types of toys don’t come out all the time .. but when they do, man thats Japanese toy perfection !