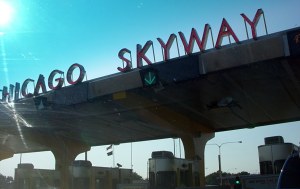 OK, what time zone am I in ?!!, I suppose not as bad as traveling to Japan but still I was on East coast time than Central time zone back to East coast now West coast … so excuse the typos and/or if I get someones name or toy mixed up (email me with any corrections, please) To recap, just got back from Toy Karma 2 art toy show at Rotofugi in Chicago. As those of you who attended know, the show looked hands down Awesome ! All due to Kirby, Whitney and David of Rotofugi ( and if I am leaving out others my apologies ! ) Of course, I did not take near enough pictures .. hope to have more soon, but will post a taste of the show here …I’m not showing nearly enough examples and to those who do not see their work here don’t worry it was in the show and look fab 😉 A record breaking 184 pieces from 70+ artists are on display ! Go on over to Rotofugi’s web site to check out whats left for sale .. still some amazing work to be had .. in a funny side note, when i showed up to a small get together at Cleo’s down the way from Roto …

… someone said to me, “oh, all your pieces have sold…” “hmmm, really ?”, I said, “how can that be… the gallery isn’t open ?” D-oh !.. there was a preview email that went out on Thursday that I did not get, so I had no idea that over half the gallery offerings were sold out ! Yikes … so much for trying to score Ralph Cosentinos art (!) No matter, the goal is to get sales for everyone.. so I’m glad we had such a strong showing given this sluggish economy.. 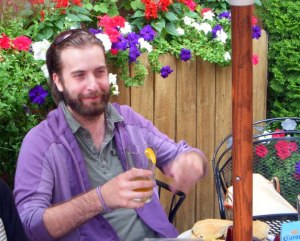 you’ll have to forgive my rambling, as I sit here reflecting on the last 2 years since the first show I can see the growth of the Kaiju / Japanese toy movement .. and although there have been ups and downs, for the most part the movement is inching it’s way into more mainstream markets and influence. I think both Kirby and I felt this show should reflect not only established guys, but also up and coming artists .. I feel pretty strongly about having new blood ,as they say, to be able to show their work.. thats not to say that anyone can be included ( sorry ) but still I’m a firm believer in helping out artists and spreading the good karma around.
My first impression of the show as i walked in ? Well, I didn’t want it to end 😉 I was hving so much fun looking at everything ( and under my breath saying damn to everything I wanted marked sold ) Even though we had so many pieces I could totally see double the amount some day (!) .. I say this as Kirby cringes ( ha-ha )… but I could also see these in a museum setting as well .. I may not be here to see this but after spending the previous day at the Art Institute

it dawned on me that the movement we are all in now, although seemingly unimportant to most on the outside will some day be looked back upon as the dawn of this Kaiju art movement. If you study any of the popular art movements you will see that rarely are the people involved at the time able to recognize what exactly is happening , the big picture so to speak, or how their movement will be remembered…or placed in the context of the greater society… well, I leave this to future historians to muddle thru, as of here and now this art show will no doubt go down in Kaiju history as not only the largest and most diverse to date, but also a very successful one during a tough period for artists.
So, what makes me think this show is this good or have such a lofty point of view about it ?

I think because the level of artistic work since the first show has risen to a point that these works can and do sell in New York and London auction houses is to be considered… but also the creativity of my fellow artists is really at a very high point.. and it shows. Photos to be honest can never capture the subtle shading or pin point painting techniques I saw on these customized figures. The glossy nature of some figures makes it near impossible to photograph … but, in person the depth of paint and colors is like looking into a kalidoscope of fun !

Many will point out the role of speculators in all this, and thats always been a part of the Fine Art world, the battle between ones true art and the commercial aspect of it. I leave it to the market and other sources to figure all this out …this being the third rail of toy collectors 😉 To me the works speak for themselves .. and what marvelous work it is. 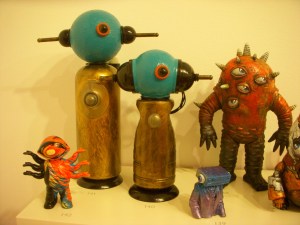 – great music for the event by dep –

I was busy talking with many folks..so much so that I only got in a few words to Kirby and Whitney before I had to go 😉 anyways they were swamped on the other side ringing up sales ( so I’m sure they were fine 😉 ) As I was leaving someone said oh how about Toy karma for next year ? to which Kirby quickly said, no way next year but in 2 years, 2011 !
So there you have it my quick thoughts some pics ( more in future post ) and mark your calenders for 2011 and Toy Karma 3 !!!
oh and if your in Chicago, go to Greek town and have dinner at the Greek Islands resturant .. some yummy food and maybe you’ll see these really cute dogs in this random store front !