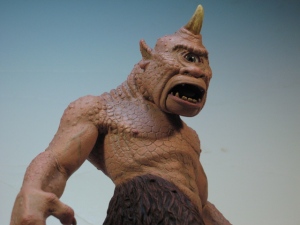 Mike Maddi of Puppetoys… remember his name.. you will be seeing more from this very talented sculptor / artist … awhile back i blogged about liking Ray Harryhausen Cyclops figures and Mike emailed me to show and tell me about his new garage kit just out from Earthbound Studios. For those who don’t know what a garage kit is .. well it’s usually a model kit made of resin.. and made well in your garage ( meaning self produced in super low numbers ) .. the early kits tended to be very poor in casting and sometimes sculpting, but most if not all have the spirit of fandom in them and are always a labor of love. As I opened Mike’s email my jaw dropped … this was to me and to date the most accurate Cyclops figure or kit I’d seen. Of course, I ordered one and I just got it in the mail. So did it meet my expectations ? Better than that it exceeded them ! I was not disappointed, the level of finish and detail is at a professional level ( which is not surprise as Mike has years of SPFX film and TV experience ), but more importantly it has that movement and grace in the sculpt and the “spark” of life that only comes from one who loves the subject he’s sculpting. I’m told that Ray himself was very impressed with this version .. well you can not get any better than that ?!! 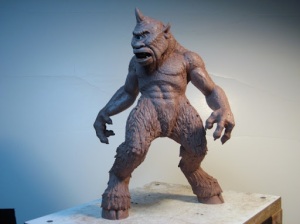 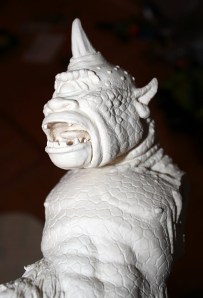 The figure is VERY cleanly cast in 5 parts ( 2 arms, body, jaw, and base ) .. Mark Brokaw of Earthbound Studios has always set the bar for cleanly cast kits and this is no exception.. ( note future kits may have the head cast separately ) 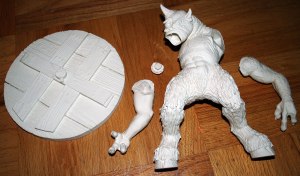 if there was any downside to this kit for me was the lack of a box for the kit ( although it’s not a big deal at all ) and I’m sure many don’t have the space anymore for boxes anyways ( like me ! )
The finished kit will stand ( on a great base ) about 11.25 inches tall. It’s a straight forward build with a small amount of putty work to the shoulders, but that’s about it. I’ll post pics once i finish painting mine … I highly recommend this kit, so send an email to Earth Bound Studios ( earthboundstudios@yahoo.com ) and order one ( $150 plus $10 ship USA ) before their gone !
Mike also showed me some pics for his upcoming Mighty Joe Young figure .. check out the hair work on this .. really nice ! 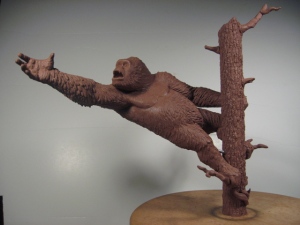 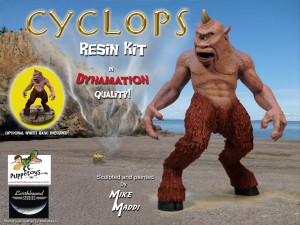 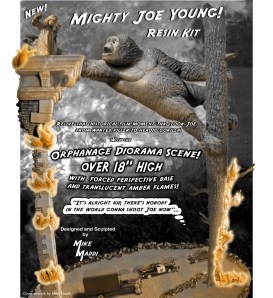