Someone said it’s good to be busy .. yes, i guess so, but i think i have too many irons in the fire so to speak (!) Of those I can comment about here ( in public that is ) I think the list was about a dozen projects in various shapes and sizes ..believe me I have learned to say “No, Thank you ” but I guess not enough 😉
Without further ado, here’s a few things ready to show and tell … 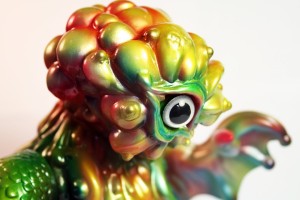 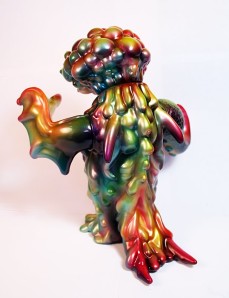 For up coming Kaiju Blue show in Tokyo, this custom Blobpus figure ( see the Tripus arm ? ).. I’ve been told that actually they do not do sales to outside of Japan, so if you want this one you’ll have to ask a friend in Japan to purchase it … look for a Max Toy Company Kaiju Blue show in November ( I think ) with a nice twist on the usual way these shows go …and coming in a matter of days ( Sept 5th, Rotofugi, Chicago ) here is a sneak at a few customs that will be up for sale from me …a couple of Neo Eyezon customs ( more to follow ) 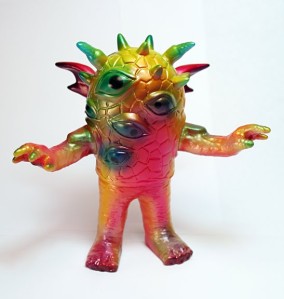 when I do these customs I know it’s a good one when I don’t want to sell it .. I felt this way with this clear Kaiju Eyezon with Guts .. it came out really nice 😉 I hope you think so, too … 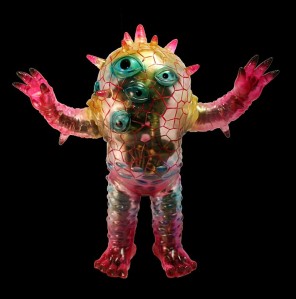 Please note that Rotofugi will give the first chance at buying these figures to those who show up in person .. whatever is left will go up on their web site .. so there will be no pre sells or reserving of toys ( for reals ) But you can email them to get on a Toy Karma 2 email list, which will alert you for Previews and when it goes up online Email them here. anyhows am still working on a few more customs as well … see you all in Chicago !
and these pics just in, mad man and super artist Carlos Enriquez Gonzalez with the Life sized Boy Karma ! This ones sold .. but check out the Boy Karma with all his friends 😉 Ha-ha … what do people think of this stuff in Venzuela ??? Although maybe the kilt is more scary than the Kaiju ? ;-P

as in my previous posts we are half sold on these, edition of 8 pieces, each one has unique paint .. email me if you have interest , but be for warned this is for advanced collectors ….OK gotta get back to work, more updates soon, I hope before I leave for Chicago !