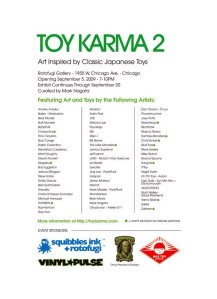 After 2 years since the first, ground breaking show, this September 5th, 2009, Toy Karma, the Kaiju and Japanese art toy show returns to Rotofugi Gallery in Chicago ! I am honored to once again be curating this show. This show features a staggering 68+, gathering of artists, designers and customizers , the largest gathering ever for this type of show ! I dare not single out any one artist, so look at the list and I am sure you will recognized familiar names, but we wanted to make sure we also had up and coming artists, too. Check out Rotofugi’s web site and forum for more updates, we will also have the Toy Karma web site updated in a few days as well… Exclusive toys and artists attending will be posted in the weeks to come … ! I will be there for the opening and look forward to seeing all the cool Kaiju art !!