It’s Monday and we have a day off, well sort of .. the early part of the day finds us in Akihabara, and looking at the new Mandarake. I did not find any vintage Ultraman’s to add to my collection, but they did have a lot of vintage Kaiju .. and a nice selection of very rare figures at that .. still in the $3000-$8000 ranges for the rarest ones, but these prices are down from the highs of just a few years ago. I did manage to score a very cute pair of advertising figures.. oh no I hope this doesn’t mean I’m going down a new collecting habit 😉 While cooling our heels waiting for Dream Rockets Yajima-san to show, we ate some Gyros .. which were quite yummy !
Carlos and family parted ways as it was off to more toy meetings for me !
Tuesday breaks and it’s the last day of the show. We really do not expect any sales or people to show up since it is a work/weekday .. but how wrong we are ! Once again at Noon, a steady stream of last minute shoppers come …. Matt Walker of Dead Presidents Designs made this special sign for me and the show .. as with all his customs, really quite impressive in person, with clear coat and my fav glitter ! Oh ya, and his incredible pin stripe, too !

As I’ve mentioned I had some nice encounters with folks coming to see the show, this one guy came and gave me these really cool and cute cell phone mascots .. he makes them himself, he said his web site may not be fully updated but in case your curious check it out here!
these are only about 1.5 inches in height …

Very talented sculptor, this Godzilla made from Sculpy .. and sold at a Wonderfest… the detail was insane ! 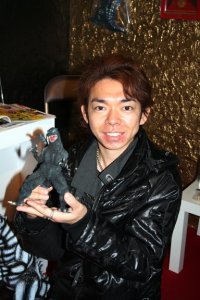 Well Tuesday wrapped up and I can safely say we were ready to end the show 😉 It was a good time but so grueling… time to have a nice dinner, which we did. 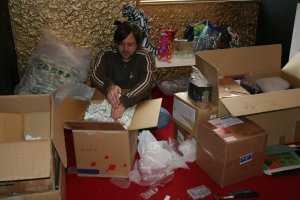 Wednesday arrives and it’s time to pack up and do final clean up. The shippers and movers would not come till 4-5pm .. so hey we have like 5 hours to pack up, no problem, right ? Well I won’t bore you but again more visitors and the fact that we wanted to wrap stuff so it would not break.. we barely made it .. but we did and suddenly the gallery was empty ! 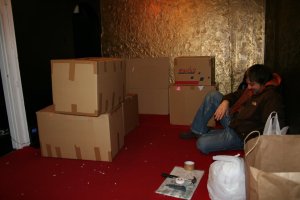 I also had to insert into this a mini search that went on over the days I was in Japan to get these soda cans with Ultraman suit markings on them 😉 ya, I know kinda dumb .. but I had to get these !

the owners of the Ghetto and I as I departed my home for the last few days … So the big question is will we do this again ? I would say in brief, yes ! but right now I can not even think about another one, the amount of prep and emails involved .. well it’s a lot of work ! My attentions are turning to Toy Karma 2 in September at Rotofugi in Chicago .. beyond that there’s something brewing that will be revealed soon ( I hope ! )… 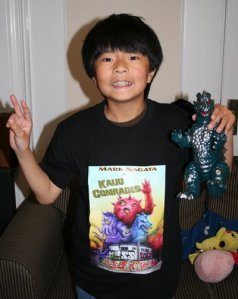 and finally poor max was not able to go, but I suspect he would have been bored stiff by all the boring “toy talk ” ;-P but he did manage to score this very cool custom tee a special Max Toy Fan made for him and me !
For me this trip and show was always about my Kaiju Comrades, each showcasing their incredible talents and creations ! I thrive on collaborations as well as new challanges .. I can not tell you how many folks i meet who say, “if only I could do …” to that,I say “Yes you can !” and you should. Don’t wait for something to happen but make it happen, you’ll be all the more richer in your life and life experience .. failure ? It happens, but the more important aspect is to learn from it and keep on moving forward… in a positive way.