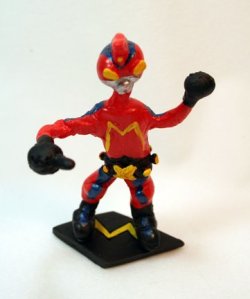 above Max Nagata and his sculpt of Captain Maxx !

Part 5 – Hmmmm, where did I leave off ?!! Like being in Japan I was always a day off, thinking it was Saturday when it was Sunday 😉 Well, Sunday came and we though we’d be slow, but again every hour a new wave of curious and friends would stop by to see the show. One thing I noticed was just about everyone was taking pictures with their phones .. like non stop … ! Where these pictures would end up is anybodys guess .. one guy had a paper with these tiny drawings of almost all the exclusives we had .. all hand drawn, because he could not print them from his computer (!!) it was hilarious ..the one of carlos’ V-Monster was really funny .. anyways he went around jotting down prices while talking on the phone and looking at his list .. after nearly an hour of going back and forth between rooms, he wound up only getting a few items. It appeared that whomever was on the phone was not prepared for some of the prices ( ha-ha ) The rest if the day was a blur for me, perhpas a combination of jet lag and missing my family..Monday the gallery is closed so that would be a free day, more on that next time. But one thing i failed to mention was Yo and I paid a early morning visit to master painter Goto-san to pick up my new kaiju he just painted.. but let me step back a bit and explain how this came to be …
… I’ve been working with Yajima-san of Dream Rocket off and on since my Super7 days and have always gotten along with him and his very positive outlook on all things toys. I’ve had it stuck in my head to do a classic style Dinosaur type Kaiju .. but never got a design on paper i was totally fond of .. until early last year, while leafing through my sketch book, Yajima-san saw these sketches i did and said that he’d like to do this one for me ! Of course the answer was a quick “yes !” and the process was started. 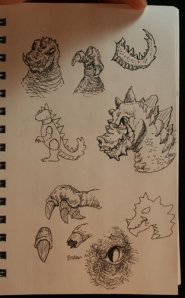 Yajima-san improved my basic designs and rendered this final design, which got a big thumbs up from me, of course ! 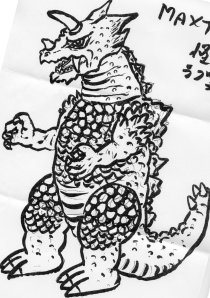 this painting from an issue of Japanese Toy Magazine KaiZine, was a little sneak at what was to come .. here I rendered Drazoran with a more Marusan-like Godzilla body.. but the message of the painting was that indeed Kaiju toys are viewed outside of Japan as works of art, dare I say Fine Art (!) .. a discussion I’ve had countless times with my Japanese counterparts.. but one thing I realized is most Art movements are actually started outside the countries they are in .. in a way the toys as fine art can only be recognized from a foreign perspective … than once this is established the home country will in turn recognize the art form itself. I actually believe this is what is happening.. I may not see this happen in my lifetime, but it will happen this I am sure of. Ok so to get back to the Kaiju at hand …

At last years Wonderfest Yajima-san showed me this in progess rough of Drazoran ! Wow, it’s really coming together .. so close ! It was during this trip that I also met master painter Goto-san .. more on him later….finally, the Drazoran is done.. I was more than pleased ! 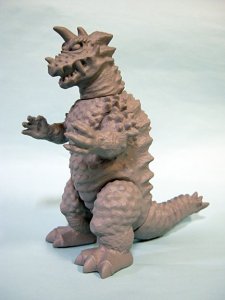 to prepare the figure for the soft vinyl process it is cut into parts and a wax version is made ( sorry not shown here ) this wax version is used to make the iron molds, and in turn what the vinyl is poured into.
The first few pieces poured are called test shots and here’s the flesh test shot sent to me for final approvals.

After getting this test shot I ask Yo to ask Yajima-san if it would be possible to have Goto-san paint my Drazoran ? It would to me be such an honor but i do not want to assume this .. to my delight he does agree to do this (!!)
So as I arrive in Japan for this art show and am told we have to go pick up the first painted versions of Drazoran. I’m super excited to not only be seeing the first painted version but also meeting this master painter again ! After several subway rides we arrive at Goto-san studio, really a VERY small work room…

we enter and I glance at this toy .. at first I think it to be an old Marusan figure .. but upon closer inspection my jaw drops, it’s the painted Drazoran !!!

quickly I ask if Goto-san would autograph the figure for me .. and he does ! 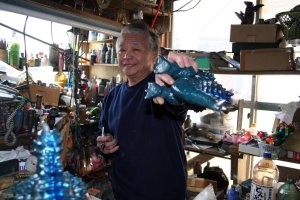 For Goto-san this is just another job, one in a long line of 50 plus years of painting toys for a living, I think he thinks I’m crazy .. but really it is my honor to have him paint my kaiju toy. 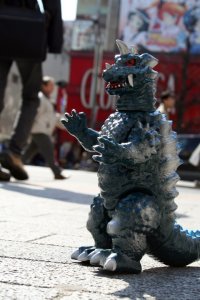 and if that was not enough Yajima-san presented me with the actual sculpt for Drazoran !!

This is the life force, so to speak, of any toy, the sculpt. Mostly thrown away and or forgotten I can not put into words how happy this made me ! 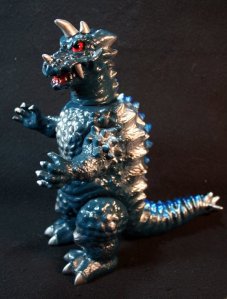 Believe it or not this version is almost sold out and I haven’t had a chance to offer it here in the USA ! Max Toy club members will be given first chance but look at my site for more info on this very soon, plus we will be opening our toy club up to new members very soon !
I have a few left, but because the demand at the Kaiju Comrades show we are about sold thru.. amazing. So what could have caused this ? I’m being told the design and sculpt is old school Kaijyu , and not so much American Kaiju ! Perhaps splitting hairs, but if my first reaction was a true one thinking this a vintage toy, than it follows that perhaps others may think so too. Whatever fans reactions are to this I am so glad I took this journey.. meeting amazing artists like Goto-san and Yajima-san … really the circle is almost complete 😉 But my mission to spread Kaiju
is not over for sure, I have many plans that will be unfolded in 2009 and 2010… it’s just getting started. Next time part 6 !