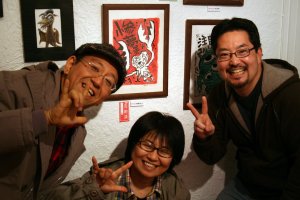 Part 4 – I’ve had the privilege of meeting a true master of Manga in Japan, Karasawa-san or Karasawa-Sensei as he is called in Japan and his charming wife, Yoshiko on several occasions. I was first introduced to them a few years back at a San Diego Comic Con by MC Bat Commanader of the Aquabats. Being a total dummy that I am, I had no idea that this meeting would represent and result in the wonderful collaborations we have had. Karasawa-san, and Yoshiko-san have always been so kind to stop by my toy booths in Japan, taking time from their very busy schedules. I was to learn later how very busy he is not only drawing many Manga comics but also lecturing about Manga, and producing the popular Patchi Summit conventions ( it’s a celebration of toys made back in the 60-70’s that we would call bootlegs or unlicensed toys ). I was lucky enough to have Karasawa-san contribute to my Bromide set last year, those images are so fun and cool 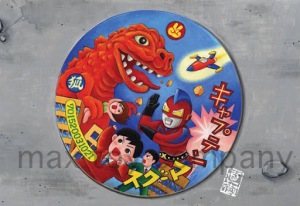 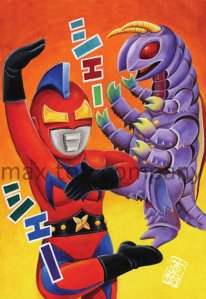 On their visit to the Kaiju Comrades art show, I told them how stunned I was at the beautiful prints he made !
I also confessed that my biggest regret was not coming to visit Japan in the 80’s or 90’s .. when many of my illustration heroes like Komatsuzaki or Meamura were still alive .. oh how i would have loved to meet them (!)
Karasawa-san agreed and that time is running out for some of these unsung heroes. He said he is trying to interview all the old Manga guys and get all their stories down .. I agreed it was most important to do, and was glad to hear he was doing so. Which brings me to what was for me a very special set of prints that were for sale at the Kaiju Comrades art show .. these four, AMAZING prints of:
Captain Maxx 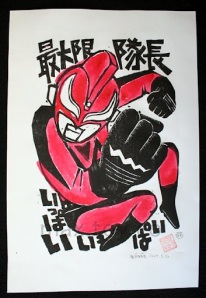 according to Miyamoto-san, the translations for this are: 最大限隊長 is Karasawa’s own translation of CAPTAIN MAXX. MAX is written 最大限, and Captain is written 大尉 and this way, too 隊長.
いっぱいいっぱい means ‘many many (I think he meant ‘Max Max!’).
Kaiju Tripus 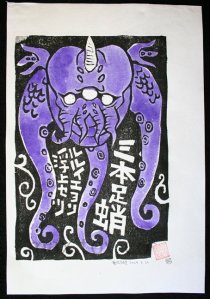 三本足蛸 basically means ‘three leg (tentacles) octopus’
ルルイエヨリ浮上セリ means ‘it came from (floated from) R’lyeh. R’lyeh is a fanciful undersea city in Cthulhu Mythology, from the book written by H.P. Lovecraft. Because the monster in this book looks like octpus or Tripus toy ??
Kaiju Eyezon 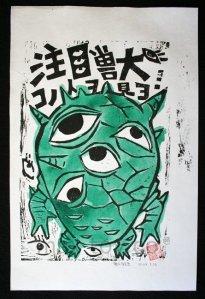 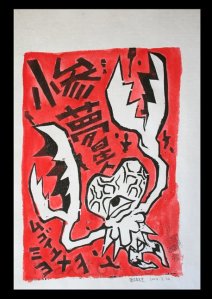 惨夢星人 is Karasawa-san’s own Japanese translation of ALIEN XAM by sound…because 惨夢 means ‘terrible dream’ which has nothing to do with Alien Xam ( well maybe it does ?)
ムゴイユメヲ見ヨ means ‘have a terrible dream (nightmare)’
As you can see below, Karasawa-san went all out in making these prints. They are each hand carved out of a wood panel in traditional Japanese style. Black ink is rolled over the wood block. 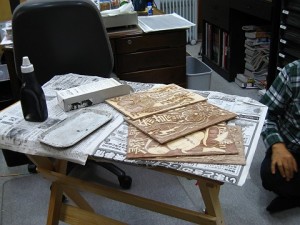 Paper is placed on top of the panel and the top surface is rubbed. This paper is then slowly peeled off and left to dry. 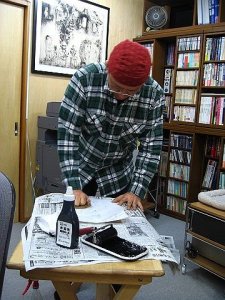 Once dried washes of color can be applied, than signed.
The amount of work involved in this process, from basic designing of the four images to the labor intensive carving is truly amazing !!!
For me this set of 4 prints represented a perfect combination of melding my Western take of a Japanese superhero and Kaiju with Karasawa-sans Japanese craftsmanship. 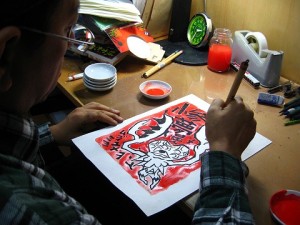 it’s no wonder these sets sold out competely …
In Japan, I have been labeled as making “Kaiju” and not “Kaijyu” .. meaning my take has a Western feel or sensibility. Of course, I am to blame partially for this as a person spreading the “Kaiju” word in the States .. but not unlike “Otaku”, the word here has taken on a different meaning and really covers a wide spectrum of Japanese toys from Art Toys,Fight Figures, and to yes, Kaiju figures. I may have Japanese genetics but my upbringing is American, so I do make Kaiju figures but hope the inspiration and historical acknowledgment comes along with it. But having said that I am about to lanuch a new Kaiju that many fans in Japan have told me is my first “real” Kaijyu … called Drazoran … more on next time in Part 5 ….