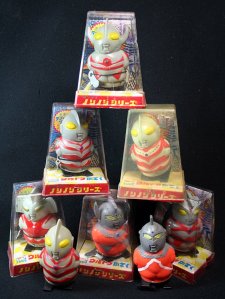 When you collect obsessively as I do Ultraman stuff, there’s always that one figure or toy you just can’t seem to find .. sometimes it’s something so expensive it doesn’t really matter if you do find it, as I couldn’t afford it anyways. I’ve been collecting these Bullmark super deformed wind ups for over 8 years now. For the most part they’re fairly easy to find and usually not expensive. However, several of them have eluded me until a few weeks ago !
According to the back of the box there are 8 total – Ultraman, Ultra Jack, Ultra Father, Ultra Mother, Ultra Ace, Ultra Taro, Ultra Seven and Zoffy. And because Taro is the newest on this list they came out during that show which makes it 1973-74.

I really didn’t think there was any demand for them, so I thought how hard can this be ? The first few were easy to find, Ultra Father, Ultra Mother, Ultraman Taro, and Ultraman Jack. Ok 4 down, 4 to go ….. 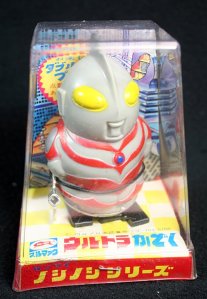 But than I hit a wall … Ultraman, one would think would be easy to get, but I could not find it anywhere. To top it off, I kept finding Ultra Jack .. being passed off as Ultraman. After another year of searching, finally while in Japan at the Nakano Mall Mandarake I found the Ultraman version. They are very close in appearance but as you can see there is a difference … see the double lines ?

jack with double lines scribed into the sculpt
versus the Ultraman version which does not have the lines in the sculpt… trickey to figure out to say the least !

Ultra Ace took awhile but I found him, too

Phew … Ok thats leaves, Ultra Seven and Zoffy.
I know I will have to pay thru the nose for Ultra Seven .. it seems to me in Japan, Seven has much more hardcore toy fanatics than Ultraman. So when one popped up on Yahoo Japan I know I would have to bid higher than i wanted. But as Toy Karma kicked in I was able to score one for under $200 …. ya I’m sure thats a crazy price for those not into these little buggers but this was the only time I have seen one of these wind up Sevens come up for sale.

So finally I’m down to the last one, Zoffy. Again, like Seven I have never seen one for sale, anywhere… and after about 2 years of searching, Zoffy pops up on Yahoo Japan auctions.
I hate it when you find something you need to complete a part of the collection … and you don’t know if you should bid high, wait till the end to bid or what ?!! I guess I’m the only guy collecting these as I was able to score it after a few rounds of bidding and again for about what I paid for Ultra Seven. Amazing to me that I won but I guess no one wants these that badly.. just me ! Can you imagine out of the billions of people in the world, I’m the only one ? Ha-ha …

And as an interesting side note, tucked behind the card board insert which each wind up sits on is a grey sealed bag that has a small trading card inside.

and to show you the relative size of these figures here’s me holding (and not fondling as my wife points out) one ;-P

So finally I can put to rest the wind up Bullmark super deformed Ultra family Collection .. all 8, a complete set ! and now you know way too much about something you probably didn’t care about !