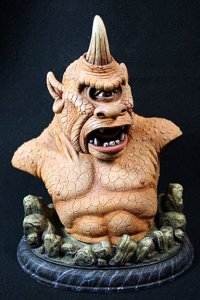 Yes i do collect other things, not always Ultraman 😉 ! While I wasn’t born yet when the original 7th Voyage Of Sinbad came out in theaters, like so many others saw it on TV during my youth and it remains a favorite and still gives me chills when he first emerges in the film .. of course later on I would learn that Stop Motion Master and Legend, Ray Harryhausen was responsible for this. Well, over the years I’ve bought resin kits also know as garage kits ( basically kits sculpted at home and hand cast – most are not licensed but rather fan appreciations .. each kit needs to be sanded, and glued together, sometimes some putty work and re-sculpting are needed, than primed and painted ) of the Cyclops. Some are spot on others take liberties but remain true to the characters spirit … I do not have them all, but here are some of my favs I’ve built and painted … 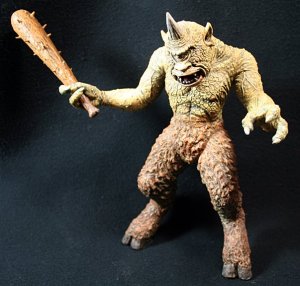 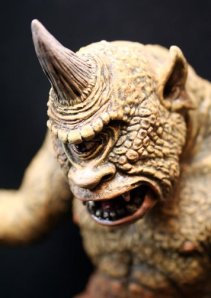 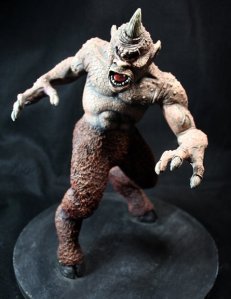 Tony Cipriano resin kit 12 inches tall
I love the pose of this kit. I remember I had to track down the sculptor and twist his arm to pour me a copy ! By the way poorly painted by myself, I believe this one of the first kits I ever paint, some 15 years ago ?!! 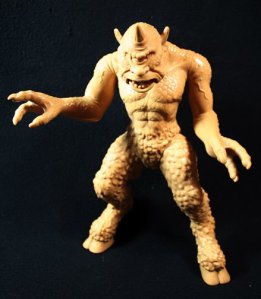 Billiken Cyclops soft vinyl kit – set the standard for what a true Harryhausen version kit could be – 9.5 inches tall 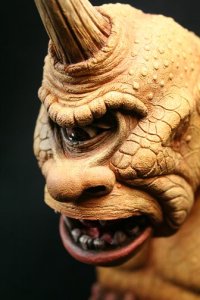 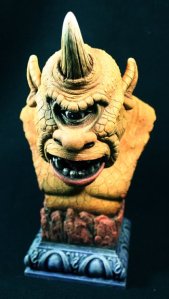 In my opinion, Mick Wood has produced the 2 best versions of Cyclops to date, both are busts, the one at the top of this blog and this one. Both feature incredible amounts of detail which far surpass the original stop motion model, but they both possess that intangable something perfectly .. I guess the spirit of the Cyclops ! I keep hoping for a full size version from Mr Wood … perhaps someday.

Dave Burke designed this “cute” Cyclops .. it’s hard to stand up but so cute ! 7 inches tall. 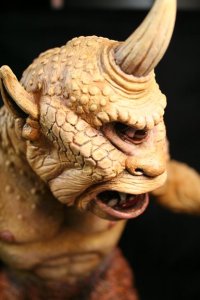 And finally the best full figured Cyclops from Monsters In Motion and sculptor Joe Laudati. Standing about 16 inches tall and sporting his spiked club, this was dubbed by Harryhausen himself some years ago at a Garage kit show as the closest in scale and details to his original stop motion puppet. Fur is one of the hardest things to sculpt and this one does a good job of it. The face to me is spot on and the over all pose is well done.
I know I’ve left out many other kits as well as the more recent Japanese soft vinyl figures. Also there are many more Cyclops coming, so for the die hard Harryhausen Cyclops collector now is the best time to be collecting for sure !