from left to right: Jeremy Chestler, director of South Florida Art Center, James Levy collector, artist and collector Mark Nagata, and curator Harold Golen in front of the show stopping fiberglass 14 foot tall Darklon by Carlos Enriquez Gonzalez.
====================================================
It was my first time in Miami Beach, Florida. The last time I was in Florida was to see Disney World and that was some 17 years ago !! But time was to attend the Kaiju Monster Invasion art show and also to see some of the many Art Basel events going on at the same time. It was clear form the newspaper headlines that because of the economy the expected multi million dollar deals the Fine art world has been use to at Art Basel was not going to happen. Still us artists have to keep pushing forward and stay positive .. my main purpose of attending besides supporting the South Florida Art Center and a long time Florida collector was to further spread the word on Japanese toys and the history behind them. As you will see in this report I think to that end we hit a homerun ….
Leaving the cold foggy days of San Francisco we landed late at night and leaving the airport were hit with a moist blast of 70 degree heat ! 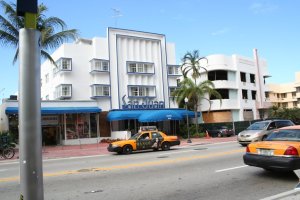 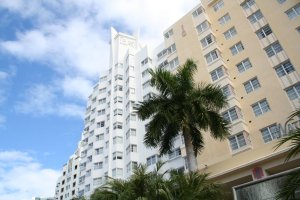 I got a sense this district is in the middle of a revival with portions of blocks bordered up or for lease, while a few doors down an old Art Deco building is being gutted and redone. The show itself is held at the South Florida Art Center, on Linclon Road, which is a very trendy street with good eats. Here are pictures of the various large windows surrounding the Center …Max at the front doors…. 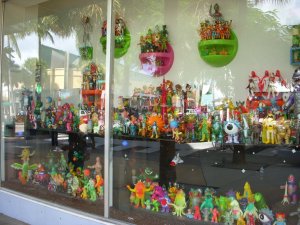 Very impressive soft vinyl display from super collector James Levy ! over 200 figures in this massive window, at night the bottom part has a black light so all the glow in the dark figures glow !Really nicely done and I have to say I over heard a lot of positive comments about this window .. from folks who have never seen figures like this …

He will do a talk on Japanese toys next week at the Art Center sponsored by the Japanese Consulate of Miami. 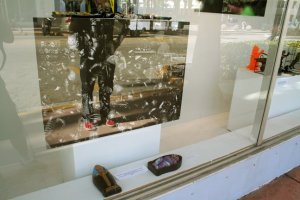 Marusan of Japan allowed use of this classic photo from the Marusan factory back in the 1960’s…. 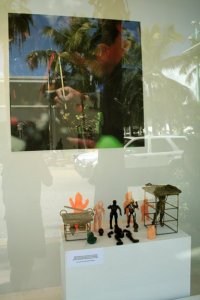 Large picture of Goto-san painting a toy… Goto-san is a master toy painter in Japan and has been at is for over 40 years, picture courtesy of Toy Punks … 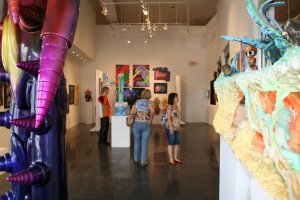 over view of the main gallery space…

and random shots of the wide array of artwork, sculptures for sale. 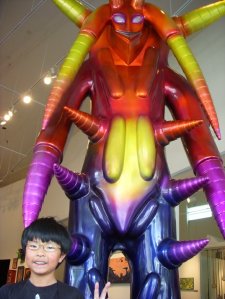 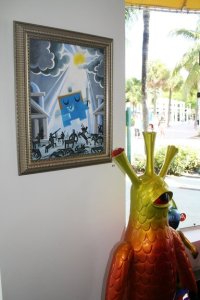 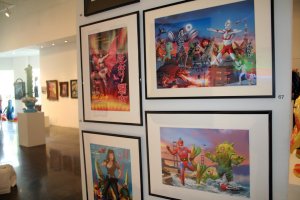 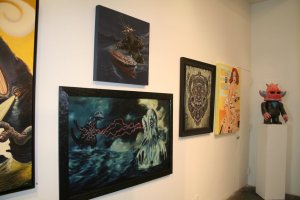 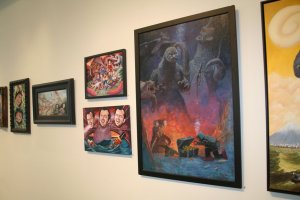 and than the night of the show with the artists signing … 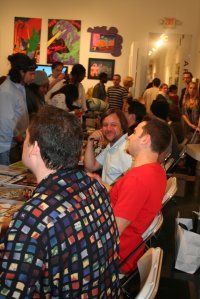 really nice turn out and had the pleasure of talking with many new and long time collectors…
the next day we took a Duck Tour of Miami Beach … thats a vehicle that goes on the road and on the water .. saw Richie Rich homes like this one …

also was able to check out a few Art Basel shows .. really too many shows to see, but gave me a good feeling of what the event is all about. The local paper said most dealers felt the buying was down quite a bit , so no doubt the economic crisis is taking it’s toll on the art scene…but still the folks who came to this show were amazed and awed by these Japanese toys and by the wonderful artwork on show.. so i feel the show accomplished this and showed the Southeast of the US what Kaiju is about.

and on the final night I was there there was an electronica music show with a kaiju battle performance to end the night ! My only blurry shot of the battle 😉
==================================================
The show will run thru the first week of January 2009, so you still have time to purchase art and show exclusives ( nice glow Damnedron Rumble Monsters exclusive, Dream Rockets exclusives and StrangeCo Jim Woodring exclusive and more ! ) I believe all these items will be available from Haroldgolengallery.com, so go over there to request prices etc .
Thanks to all who came out to the show and for the kind words and support and to the talented artists I met.