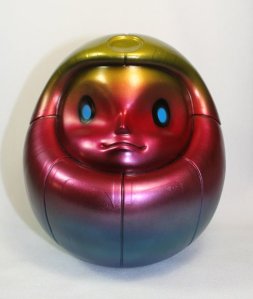 I did this custom Daruma for the Dreams to Dreams art show at the Japanese American National Museum in Los Angeles, CA. opening Dec 1st, 2008. 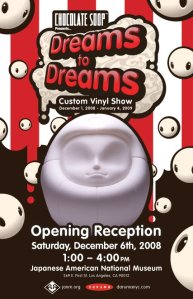 Dacosta! a.k.a CHOCOLATE SOOP and the Japanese American National Museum have assembled the first custom toy show held in a museum. 45+ artists have customized his DCTO (Dreams Come True Object) Jibun Project, a futuristic version of the traditional Daruma toy. The theme of the show is “Dreams to Dreams” and is based on the poem of the same title which speaks to childhood dreams, possibilities and looking to the future.

The finished art pieces will be on display at the Japanese American National Museum from December 1, 2008 through January 4, 2009. Pieces will be available for sale through the Museum Store.

*Opening reception will be held on Saturday, December 6th, 2008

The show will lead up to Oshogatsu weekend (a significant celebration in Los Angeles’s Little Tokyo area). there will be educational and entertaining programs that tell the significance of Daruma and other cultural icons for the New Year.

For more information you can check the dctoproject.com or janm.org
Sponsored in part by: Daruma Asset Management, Inc.