You will have to excuse me as I’m suffering from jet lag today ! The family and I just got back from Japan .. this mere days after attending San Diego Comic Con 😉 So lets briefly start at SDCC 2008 … 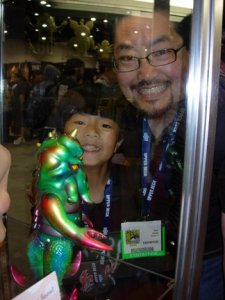 this year I decide to have the fine folks at StrangeCo show and sell my Max Toys at SDCC. For the first time in over 6 years I was able to actually walk around and enjoy SDCC without worrying about rushing back to my booth (!) although in hindsight I should have arranged times I would actually be in the StrangeCo booth.. as I missed many folks who wanted to see me.. sorry about that… next year we’ll have it down better… but thanks to those who did stop by ! 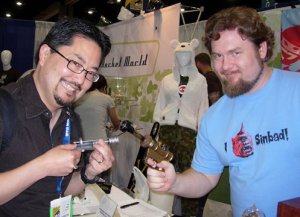 to be quite honest one of the only booths that got me excited about toys was my good friend Steve Forde’s booth, GoHero ! I’d known about his project for awhile, and even saw some pics of his protos but this was the first time to see them up close …

I have to say I was blown away by the quality and craftsmanship on the figures. I love classic Buck Rogers and these figures are a home run, for sure ! One each please … 😉 and you can not tell but the deluxe versions will have a Mp3 player in them .. pre loaded with old radio serials of Buck Rogers (!) and get this you can download into the figure more sounds from the GoHero site…. man the applications for this are numerous … ! and for the classic Buck Rogers Disintegrator Gun .. awesome ! Replicated in tin like the original and it makes a spark and pop noise to boot ! Very nice, and yes I must add to my Ray Gun collection, too. I know Steve’s got a bunch more cooking .. so if I were you i would bookmark his page and get on his mailing list.
My main focus this year was to let Max see whatever he wanted and as usual this lead us to the Lego booth and of course to Star Wars stuff. One thing I thought was lacking from SDCC were places to sit and eat .. we ended up sitting on the floor and eating lunch.. Ok for the toy geek but not comfortable for kids.. Oh was great to hook up with Brad Warner and Alex Wald, who by the way was nominated for an Eisner as Best Colorist.. sorry to say he did not win ( boo ! ) but man what a thrill it must be to be nominated !… hmmm, I did not find much for myself to buy.. did see some nice Jack Kirby originals, but at $35,000 a bit out of my league 😉

after returning to SF…a few days and we were off to Japan for Summer Wonderfest 2008 ! This time we had a table next to Cronic and NerdOne. I know Japan is hot and humid in the Summer but man this heat was almost too much to take. I believe most of the days we were there is was 93 degrees to 104 degrees ! Yikes… poor Max .. poor me too … if not for the toys (!!) Anyways we all woke up early and left for Wonderfest at 5am.. the Sun was actually already up in Japan and with Jet Lag we actually woke up around 3:30 am !.. the drive was about 1.5 hours to Tokyo Big Site and Thanks to Yo Miyamoto, Max Toys Japan correspondent, made much easier in air conditioned fashion !

after setting up were quickly ran off to meet up with other companies and see what everyone was selling and or showing ! I don’t have any pictures of this as we were only spending a few minutes if even that at each table … but as always saw many, many cool toys and even if some of the styles of toys did not appeal to me as a collector I can appreciate everyones dedication to their toys. Dream Rockets Yajima-san and Rumble Monsters Wakahara-san briefly stopped by our booth to wish us well, too..

I enjoy seeing these guys, and enjoy their positive attitudes about the vinyl toy scene… After this we got back to our booth and the doors opened… of course the next few hours were a blur of selling, and greeting Max Toy fans in Japan. While all this was going on the air con was either turned off or not working ! We were all sweating in 100 degree heat ! Poor Max .. Anna ran off on many water runs but finally even the water and sodas sold out ! At one point she bought 2 ice creams for her and Max but by the time she walked back to the booth both had melted all over her hands ! We also found out there was a terrible accident on the long and tall escalator .. I guess a few guys got really hurt on it … good thing we were on the ground floor !
As I look back on all these pictures there’s no way to convey just how hot and awful the conditions were inside … to be quite honest if they don’t have air con next year I would not even go to attend .. it was that bad for me ;-( I don’t do well in heat..
Ok thats it for this post … next time I will highlight the toys I picked up and thought were cool… make a few brief comments on the soft vinyl scene in Japan, and a report on a true master I had the privilege of meeting on my visit …