From time to time I will blog here about a toy company from Japan .. this time I will share with you a company called DxSxHx ( Dark Side Hero toys ) !
This past Wonderfest in Japan, I was able to meet the owner and artist of DxSxHx ,UUJI.But they also have help from and his two sidekicks, MANG and SGR. I asked them waht their company name meant and UUJI said that it comes from one of their main influences, Star Wars, of course ! In fact, some of their toys as you will see below have that flavor! Another big influence on them is SECRET BASE, and they attribute Hiddy for helping them to get started making toys.
From a one day license they release these figures from a series called AKUMA-KUN… these are very cool. 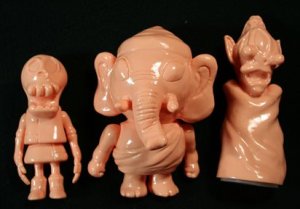 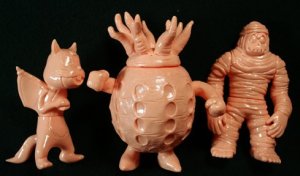 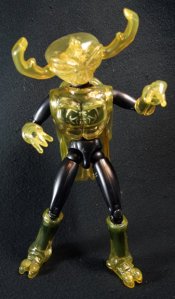 STAGBEETLE
The StagBeetle was their fist release back at Wonderfest 2004. It’s interesting to me that the 1/6 scale figures are very popular in Japan and Hong Kong but somehow in the US Kaiju/Art toy scene they aren’t … although with GoHero’s introduction of Buck Rogers soon, I think those perceptions will begin to change… but I digress… in Japan, most kids grew up with figures called Henshin Cyborgs ..basically 1/6 scale ( or 12 inch style GI Joes ) that you could buy extra clothes and masks .. to make them into anything from Ultraman to Lion Maru … This Stagbeetle is cool because the clear parts play off nicely with the black body of the figure. 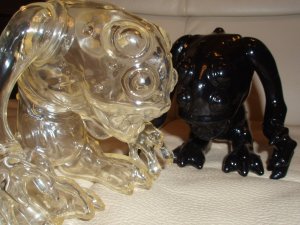 above: RADD figures in clear and black soft vinyl
Does RADD look familiar ? Think ROTJ … 😉
Though they sell mainly at Wonderfest DxSxHx toys are looking to expand their offerings and have many projects lined up for the near future. UUJI says,”Only thing I can say is that we just keep on making toys people can have fun with!!” Well said indeed, UUJI is full of excitement and positive toy karma … I love meeting toy folks who are still passionate about what they do.. and DxSxHx toys is a company to watch.