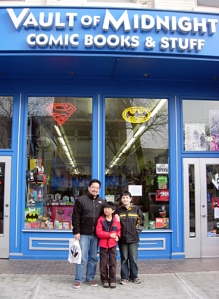 a last look at our Ann Arbor trip .. and of course a trip to target ( 2 times ) Toys r Us and Vault Of Midnight ! saw a red xam hanging on the wall ;-P and noticed that from last year their selection of Art Toys has increased … also stopped by another store called Fun For All , more comic book based.. but still cool store and picked up some missing Madman issues … I realy do not follow the current comic book scene, but do have favs like Mike Allred and Alex Ross … ok back to work for me !