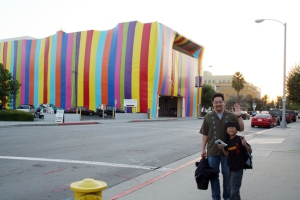 Here we are in front of the PMCA where the exhibit was taking place..lucky Max missed half a days school 😉

Was great to finally meet up with finally with Brian McCarty , whose well known as a brilliant photographer of Art Toys … nice guy and has some cool projects in the works…so be on the look out for that !

Also had the great pleasure of meeting for the first time David Gonzales, whose Homies toys are well known. I missed having my picture taken with him so this pic of the four of us signing books will have to do ;-P Us ealry folks sat down and started signing away … from left to right in the pic is David Gonzales, Me, Brian McCarty and Tim Biskup.
Anyways, I was impressed by the fact that every single figure he produces has a unique story and or personality behind it. I love to find out about toys, and the stories behind them.. something this exhibit shows. Each of the artists involved has a unique vision of what there art is about and seeing all 7 of our toys, paintings and such assembled in one huge room was very impressive … I would have had more pics of the inside but we actually were not suppose to take pictures ( oops ) .. !

Anna did snap this pic of Max and I under the Alien Xam display .. hee-hee…

Once the doors opened the crowds were non-stop for the next 2 hours … I actually did not get to see the entire exhibit as much as I wanted to, so I will have to return ( you have till Jan 6th , 2008 ! ) Had a great time meeting many Max Toy fans but also folks who had no idea what these toys are (!) I really do not mind explaining from my perspective what I think these toys are about.. and in the case of my stuff why I do what I do (!) In any case folks who came out where very impressed by not only our work ( thank you ! ) but the way it was displayed and laid out..I thought a stunning example of how these “toys” can be elevated to “art”. Maybe I’m too close to this project to have a unbiased opinion ( yes I probably am ) but I think maybe more than toys of old, these new toys are truely a new form of art .. but simply put on a cheaper level. Thats is , it’s not an original painting that will set you back hundreds or even thousands.. but for a mere $40 bucks or so you have a limited made item that reflects the artists vision of what it looks like.. not made by committee or corporate focus groups 😉 Basically in most cases from the artists sketch direct to the factory, than from the factory to the consumer.
Despite the recent Lead worries I think the Genie is out of the bottle and there will be more of these Art Toys made .. and maybe a few of them will even break the trend to become classic toys. In anycase after over 2 hours of toy discussions the reception was over and as you can see Max had enough 😉 PMCA and it’s staff did an outstanding job and I can not recommend more highly that you see this exhibit… it truely is a historic event in the short history of Art Toys. 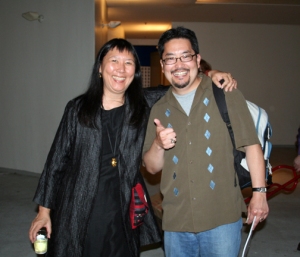 I have to say none of this would have happened without the vision and tireless work
of Maria Kwong and the LaTda staff. Having curated the Toy Karma show recently I understand some of the difficulties in assembling a group together, but that was nothing compared to what this show and book is. You have to remember this is a museum, and not a gallery, as such nothing is for sale, but rather it is to document and show anyone what this new toy trend is, but also honoring the past and where this all springs from. Each artist and work chosen that would not only tell his story but also the over all arc of where all this fits in and maybe even where it’s going.

Of course you can just view all this great stuff and simply enjoy it for what it is, fun stuff… but if you choose to.. look a bit closer and come to this exhibition, you will see that what each of us has done and continues to do is slowly building another chapter in the book of toy history… I am aware of this maybe more so now after seeing my work with the others…it’s a bit daunting perhaps, but I know I will stay true to my love and passion for Japanese toys.