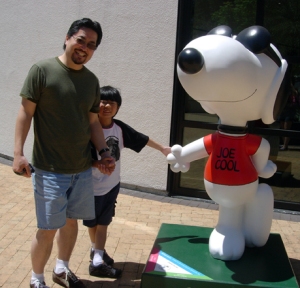 we made a trip to see the Charles Schulz museum up in Santa Rosa. For those who do not know he was the guy who drew Peanuts cartoons for many years. The museum is very nicely done and really is cool to see the original art which was done quite large. They even have an entire wall from one of his old houses…he had painted a cute mural for his daughter .. anywaysthey had to remove like 3-4 layers of latex paint to get at it on the bottom layer..but lucky he had used oil paints so it was still there ! The town also had these Joe Cool statues each decorated in different themes.