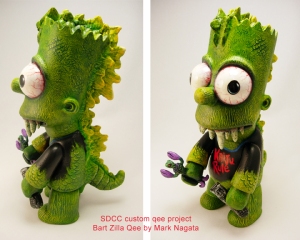 SDCC as it’s know as to the the diehards ! Ugh, Im so far behind on customizing toys for this show..every year I say Ok this year I’m starting early.. and make my list out .. but as things like “life” happen I am again looking at the black hole and must take a deep breath and airbrush like a mad man up till we leave for San Diego.I also promised i would bring some original affordable art for sale.. and have to do that, too…
Anyways squeezed in time to do this custom Bart Simpson Qee from Toy2R … actually not sure if I can post this 😉 but the original will be up for auction for charity at SDCC if you have interest.
It’s been really slow in the vintage Ultraman collecting world for me … I was tempted to bid on a cool Marusan tin Ultraman…but it ended at almost $4000.00 USD .. not a bad price but a bit out of my reach (!) Also I’ve seen at least 5 of these for sale over the last 6 months…so they are out there and not that hard to find. But was able to score a cool Ultra Ace on mini car wind up ( first one for sale I’ve seen ! )and a cool 1:1 scale Ultra Joe mask ( thanks Yo ! )
Ok back to work..don’t forget to check out OtakuUSA magazine now on all major newstands across the US and at select Target stores ! I’m writing toy related articles for them.. it’s Bi Monthly ( subscription is the way to go ! )